Plans for construction of underpasses and overpasses are gathering dust in project reports, land finalisation, technical feasibility and forest clearances

BHUBANESWAR: Odisha has lost 37 elephants to train and road mishaps in last one decade. Thirty of them were knocked down by trains - including two in Sambalpur earlier this week. Another seven were road kills. The staggering number points at the huge price these gentle giants are paying for exercising their natural rights to access their habitats which are cut open by roads and railway lines.

Underpasses and overpasses in vulnerable sections of railway lines and NHs that could have saved their lives but there is no concern Odisha Government shows to this gigantic tragedy whereas for railways and NHAI, it matters little. As a result, all the plans are gathering dust in project reports, land finalisation, technical feasibility and forest clearances. 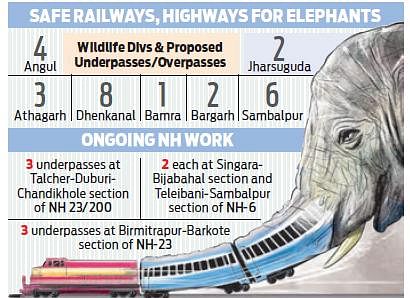 So far, at least 31 black spots along railway lines and 46 black spots along the NHs for construction of underpasses and overpasses to prevent animal deaths have been identified by divisional forest officers (DFOs) across the State. Works on the structures, though, are stuck. In wake of rising number of elephant deaths due to train and road accidents, a Parliamentary Standing Committee on Railways in 2013 had discussed elephant safety and sought suggestions from the Forest and Environment department, Government of Odisha, and Indian Railways.

It was suggested that underpasses or overpasses across railway racks would be constructed to allow passage to elephants and the Forest department will provide a list of selected locations for the purpose. The cost will be borne by the State Government and the Railways would execute the work.

But work is yet to begin in any. In Dhenkanal, the Railways had submitted a preliminary technical feasibility report but the final report has not been readied for submission to Principal Chief Conservator of Forests (PCCF) for necessary clearance, said an official of the Dhenkanal forest division. The Railways is expected to place the final technical feasibility report for the projects before the Regional Chief Conservator of Forests (RCCF) within a month. Sambalpur DFO Sanjeet Kumar said a proposal was given to the Railways to provide used rails free of cost or at a subsidised rate to take up barricading/ fencing work along with elephant corridor by the Forest department to prevent the animals from crossing the lanes. “There has been no response in this regard from the Railways yet”, he said.

The East Coast Railway (ECoR), however, says that the projects have not seen any progress due to delay in funding from the State Government. “We received proposals for construction underpasses and overpasses in 23 sites in Odisha. The State government had agreed to release funds for these projects. However, no funds have been placed yet due to which, the project works have been stalled”, said a senior ECoR official, adding in Arunachal Pradesh, work on similar projects has been completed by the Railways with financial support from the state government.

NhaI completes some projects, many pending

Seven underpasses in Angul- Sambalpur section of NH-55 have also not seen any progress due to delay in finalisation of sites. The NHAI has, so far, been able to complete construction of animal underpasses at Panikoili- Rimulli section of NH- 215. NHAI (Bhubaneswar) Chief General Manager RP Panda said the process is lengthy as it takes at least a year to get Stage-I forest clearances and the wildlife clearance to execute the projects.

Apart from these underpasses, the 1 km length Angul-Sambalpur corridor and Singara- Bijabahal 532 metre bridge have seen no progress as it requires thousand of crores of rupees to take up both the projects. Forest officials, however, maintained silence on the matter. PCCF (Wildlife) HS Upadhyay did not answer calls.

Now we are on Telegram too. Follow us for updates
TAGS
elephants railway