As the Covid-19 cases have substantially come down, the State government has now decided to intensify leprosy screening in the high prevalent districts.

BHUBANESWAR: Mobilisation of a majority of workforce for Covid-19 has adversely affected screening, detection and treatment of several bacterial and viral diseases in Odisha. Like malaria and tuberculosis, screening and identification of leprosy cases have taken a back seat in the State. 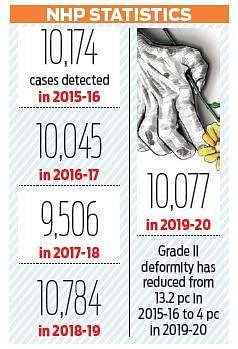 Almost eliminated a decade ago, leprosy was back in the State in 2018. Though the disease is now prevalent in 18 districts, the campaign for fresh case detection was almost stopped following the outbreak of coronavirus.

Both prevalence and annual new case detection rate (ANCDR) of leprosy in these districts are on the rise. From a prevalence of less than one per 10,000 population in 2006, it now stands at 1.47 against the national average of 0.65. The ANCDR has also increased to over 10 in 208 blocks of the State. The latest National Health Profile (NHP) released by the Union Ministry of Health and Family Welfare revealed that the leprosy prevalence rate in Odisha is second highest in the country after Chhattisgarh.

Sources said while so far over 4,000 new cases have been detected, Odisha and Chhattisgarh contribute more than 50 per cent of the total leprosy cases in the country. While Bihar and Jharkhand have the prevalence of greater than one, all other states have achieved the elimination target.

As the Covid-19 cases have substantially come down, the State government has now decided to intensify leprosy screening in the high prevalent districts. In the first phase, 208 high endemic blocks have been selected for special leprosy case detection drive (SLCDD).

Additional Director of Health Services (Leprosy) Dr Shakti Prakash Padhi said the drive would be conducted from January 18 to 31. Around 30 houses per day will be surveyed by the health workers. “Trained ASHA will conduct door-to-door survey as per the micro-level planning done by the districts. They will screen for symptoms and intimate the assigned ANM, who in turn will take them for test for detection of cases and further treatment,” he said.

Now we are on Telegram too. Follow us for updates
TAGS
Odisha COVID 19