The 490 metre barrage over Baitarani river has been constructed at a cost of `475 crore and has the capacity to store 350 lakh cubic metre water. The Chief Minister had laid the foundation stone of the project in 2009. 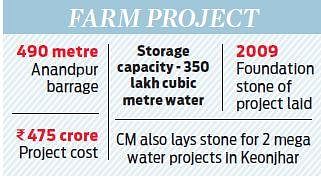 On the day, the Chief Minister inaugurated the platinum jubilee function of BN High School. Besides, he laid the foundation stone of a mega water projects for Anandpur and Hatadihi blocks estimated at `129 crore and `315 crore respectively.