Odisha's GMU to have centre for ageing research

SAMBALPUR: The Gangadhar Meher University (GMU) will set up a Centre of Excellence on Geriatrics and Gerontology with the funds under World Bank Scheme’s ‘Odisha Higher Education Programme for Equity and Excellence’.

The GMU will receive Rs 13 crore under the scheme for undertaking various initiatives. Of the total amount, Rs 1.3 crore will be spent on the project, named ‘The Odisha Centre for Geriatrics and Gerontology’, which will include research on various issues relating to the ageing population of the State.

The departments of Economics, Psychology, Anthropology, History, Zoology, Statistics, Geography and Sociology will undertake interdisciplinary research work on the subject. The centre will cover a range of aspects starting from social, political, familial to security, health and medical needs of the ageing population of Odisha.

This apart, GMU will also seek help from Veer Surendra Sai Institute of Medical Sciences and Research (VIMSAR), Burla for studies in health and medical aspects of geriatrics.

Deputy Registrar of GMU UC Pati said the study will be instrumental in understanding the needs of the aged section of the society. “The average life expectancy in India in 1951 was 32 years. But now, the expectancy has gone up to 68 years. As per 2011 census, the percentage of aging population in the country was six per cent. Going by the upward trend, life expectancy is likely to cross 10 per cent in 2021. The centre is essential considering the current situation and various needs of the ageing population,” he said and added that if carried out as planned, the research’s output may help the Government in policy making.
This will be the first centre in the State which will study the ageing population. The budget has been planned for a research period of five years and GMU is planning to make the centre self-sustainable in later phase, Pati informed.

The Department of Higher Education has included GMU under the second phase of the World Bank Scheme. Other action plans taken up by GMU under the scheme include construction of a new Academic Block to accommodate more departments and classrooms, implementation of an ERP-based online office and academic management system, a laboratory with at least 300 computers to enable the university to conduct compulsory computer training for students and facilitate online examinations, entrance test and recruitment besides seminars, workshops and teacher training programmes. 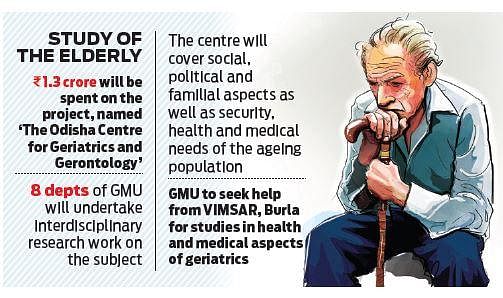 Stay up to date on all the latest Odisha news with The New Indian Express App. Download now
TAGS
Gangadhar Meher University Odisha