BHUBANESWAR:  With the State Government planning to construct 20 lakh rural houses under different schemes ahead of the panchayat elections in 2022, the BJP on Sunday dared the Government to put the beneficiaries lit on public domain for greater transparency. 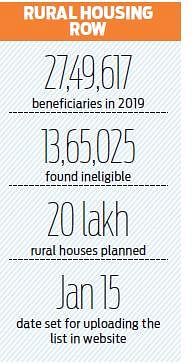 “The State Government is yet to make the beneficiary list for allotment of houses prepared last year public though the deadline is well over by more than three weeks,” said State BJP general secretary Prithviraj Harichandan. The Government had prepared a list of 27,49,617 beneficiaries in 2019 for allotment of houses under rural housing scheme of which 13,65,025 were found ineligible. The Government had to order for a fresh survey as large-scale irregularities were detected in the beneficiary selection. Maximum irregularities were detected in Mahanga, the Assembly Constituency of Panchayati Raj Minister Pratap Jena. The Minister later admitted that a fresh survey was conducted as many deserving families were left out in the list prepared on the basis of Socio-Economic and Caste Census (SECC) 2011.

The Minister had announced in the floor of the Assembly that the revised list of beneficiaries will be prepared by December 31, 2019. Subsequently, the Government set January 15 as deadline for uploading the list in Government website. “It is for the Panchayati Raj Minister to explain what is taking so long to publish the beneficiary list,” the BJP leader said. Claiming that over 43,000 homestead landless families are waiting for Government land for house construction, Harichandan said when nearly five lakh houses sanctioned by the Centre is not constructed how could the State Government construct 20 lakh houses. He further urged the Government to publish separate list of beneficiaries covered under different housing schemes like Pradhan Mantri Awas Yojan (PMAY), Biju Pucca Ghar Yojana (BPGY), District Mineral Foundation (DMF) fund and Construction Workers Welfare Fund to stop the unethical practice of hijacking the Centrally sponsored PMAY. Harichandan asked the Government to prepare and publish panchayat-wise list of beneficiaries for public scrutiny.

He cautioned the Government of serious consequences if it makes any fraudulent attempt to change the nomenclature of PMAY to ‘Mo Awas Yojana’ or BPGY. Responding to the allegations, BJD spokesperson Pratap Deb said the BJP has been making similar baseless allegation against the State Government for the last 20 years. “The Centre has been approving the list of beneficiaries and now they are complaining about irregularities in the list prepared as per 2011 SECC,” Deb said.

Stay up to date on all the latest Odisha news with The New Indian Express App. Download now
TAGS
Odisha rural houses