Soon after the examination began, there were rumours of MIL question paper being circulated through messages and WhatsApp.

BHAWANIPATNA: Amid rumours of MIL question paper leak, the HSC examination began in 103 examination centres in the district on Wednesday.

Soon after the examination began, there were rumours of MIL question paper being circulated through messages and WhatsApp.

However, an inquiry by the district education officer (DEO) revealed that the question paper was of last year. The examination was conducted smoothly. 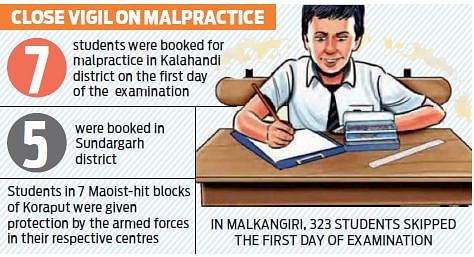 At least seven students were booked for malpractice in the district on the first day of the examination.

There are 13 nodal centres and 36 of them have been equipped with CCTVs.

A three-tier security system was put in place for the HSC examination in Maoist-affected areas of Koraput district.

As many as 14,093 students sat for the examination on the first day in 67 test centres. In wake of Maoist threat, 21 centres in sensitive areas were put under CCTV scanner.

Students in Laxmipur, Nandapur, Potangi, Machkund, Narayanpatana and Bandhugam were given special protection by the armed forces in their respective centres in view of Maoist threat.

In Sundargarh district, five students were booked for malpractice.

Sundargarh DEO Ranjan Giri said the students would be allowed to write the rest of the papers and a final decision will be taken by the Board of Secondary Education.

Stay up to date on all the latest Odisha news with The New Indian Express App. Download now
TAGS
HSC exams HSC exams 2020