ROURKELA: Rain-fed Sundargarh district appears to have marginally exceeded its cropping target in the ongoing 2019-20 rabi crop season. If Agriculture department sources are to be believed, a total of 94,021 hectare (ha) including 50,467 ha of irrigated and 43,554 ha of non-irrigated land in the district has been covered under cultivation. 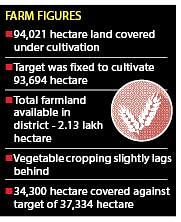 Sources informed that till February 20, coverage for cereals including paddy, wheat and Maize stood at 2,127 ha while pulses including horse gram, biri, moong, gram, fieldpea, lentil and cowpea were cultivated on 37,431 ha. For mustard, cultivation was achieved over 12,021 ha while other oilseeds including til, castor, niger, linseed and sunflower were grown over 2,289 ha. So far, total oilseeds coverage stood at 14,310 ha. However, vegetable cropping is slightly lagging behind. Against a target to cover 37,334 ha under vegetable cultivation, 34,300 ha has been covered so far. Similarly, a total of 5,853 ha has been covered under cultivation of spices including garlic, chilli and coriander.