Soon, you can walk through interiors of Konark Sun Temple, now sealed with sand

The British had filled the Jagamohan with sand and sealed it in 1903 to ensure the stability of the 13th-century monument.

KONARK:  In a historic move, the Archaeological Survey of India (ASI) on Saturday accepted a proposal to remove sand from inside the Konark Sun Temple, Odisha’s only UNESCO World Heritage Site. Hundred and seventeen years after the British filled the Jagamohan (assembly hall of the monument) with sand to save it from crumbling, country’s premier archaeological conservation body has made the first bold move. ASI accepted the proposal at the end of the two-day national conference on ‘Conservation of Sun Temple’ attended by Union Culture Minister Prahlad Singh Patel. “Sand will be removed from the ancient structure and ASI has been asked to prepare a report on the modalities,” Patel said.

One of the architectural marvels of the world, the 13th-century monument’s Jagamohan has remained sealed since 1903 when sand was poured inside for its structural stability. ASI will form a small committee of experts to examine as well as decide the openings through which the sand can be removed. The Central Building Research Institute (CBRI), which was roped in by ASI to examine structural damages in the Jagamohan, will be part of the panel. 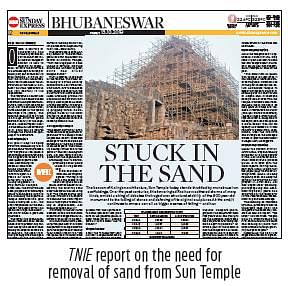 As per recommendations submitted by conservation experts to ASI in 1987, sand could be moved out through three points which include ‘Amalakh’ (fluted finial stone) on the top of the structure besides two others on northern and western sides. “We will study the best and safest routes to enter Jagamohan considering its structural stability and then proceed with the work,” said Superintending Archaeologist of ASI-Bhubaneswar circle Arun Mallik.

ASI possesses expertise in dismantling and re-constructing temples and such works have been successfully executed in Mahakala temple in Ratnagiri and several temples outside the State.

“In Konark’s case, we can open the Amalakha, dismantle the stones, number them one by one, take out the sand, treat the interiors and reconstruct the entire temple again,” he said. The other options are opening the Jagamohan from northern or western sides and remove sand safely. Last year, CBRI submitted a report to ASI suggesting refilling of Jagamohan on the basis that the existing sand has settled by 12 feet. It had conducted 3D scanning and endoscopy of Jagamohan that pointed out settling of sand and falling of stones from the top of the structure.

The New Indian Express carried a detailed report (October 13, 2019) in which experts had suggested removal of sand to assess the damage to interior walls of the eighth century-old World Heritage Monument.

“Filling it with sand would have only saved the temple for 50 or 100 years but removing it and treating the interiors will improve the life span by at least another 500 years. The condition it is in now, it will crumble under the impact of even a small earthquake. The ASI’s decision to remove sand instead of refilling it is praiseworthy,” said BK Rath, former Superintending Archaeologist of State Archaeology Wing of Odisha Government.

He added that sand filling was the only option available in 1903 for structural stability of Konark temple but today with technological advancements, there are better options available to save the Jagmohan. Eminent structural engineer Prof GC Mitra, however, said sand removal may lead to the collapse of the temple. It needs to be done with utmost care and continuity, he said. In another development, the ASI has decided to do small carvings on the vertical plain stones put up at the Sun Temple to give the monument a new look.

The carvings will be done within the permitted limits of heritage conservation Act. Besides, the architectural fragments of Sun Temple dumped on the premises of the site museum of ASI at Konark will be scientifically cleaned, numbered and preserved. There are 293 large fragments of the Sun Temple on 106 pedestals in the courtyard of the museum and 2,050 carved and plain architectural fragments in the sculpture shed.

Now we are on Telegram too. Follow us for updates
TAGS
Konark temple Jagamohan of Konark temple ASI Archaeological Survey of India World Heritage Site