The Tribunal after hearing the pleas from Odisha, Chhattisgarh, Jharkhand and Maharashtra framed 41 issues to be considered during the next hearing.

BHUBANESWAR:  The Mahanadi River Water Disputes Tribunal on Saturday posted the next hearing on the controversy between Odisha and Chhattisgarh over Mahanadi river water on August 8.

The Tribunal after hearing the pleas from Odisha, Chhattisgarh, Jharkhand and Maharashtra framed 41 issues to be considered during the next hearing.

The panel, which received some additional documents from Odisha, directed the Centre to provide it to Chhattisgarh Government. It also directed Odisha and Chhattisgarh governments to examine each other’s document.

Besides, the Tribunal directed the Centre, IMD and Central Ground Water Board (CGWB) to submit information as required by the Chhattisgarh government.

Odisha had raised the dispute in 2016 over Chhattisgarh building a number of dams and barrages in the upstream of the river.

The state government had alleged that construction of the barrages by Chhattisgarh has led to drying of river bed in Odisha during the summer season.

The Opposition BJP and Congress, however, held the state government responsible for the present situation. 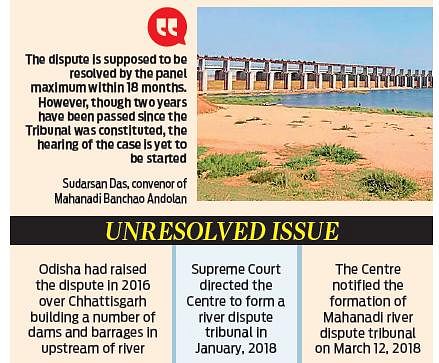 Alleging that Odisha has failed to properly articulate its stand on the river water dispute, senior Congress leader Suresh Routray said if embankments are built on Mahanadi in low-lying area, people can get water.

He said had the Odisha Government stopped Chhattisgarh when it started construction of the barrages, such a situation would not have arisen.

Alleging that Tribunal is dragging the case, convenor of Mahanadi Banchao Andolan Sudarsan Das said the dispute is supposed to be resolved by the panel maximum within 18 months.

However, though two years have been passed since the Tribunal was constituted, the hearing of the case is yet to be started, he said. Minister of State for Water Resources Raghunandan Das said Odisha is firm in its stand and sure of getting the State’s share of Mahanadi river water.

“We are waiting for the decision of the Tribunal,” he said.

The dispute over Mahanadi river water started when Odisha alleged that Chhattisgarh had “illegally” constructed a number of barrages across the river and its tributaries, which had seriously affected inflow into the Hirakud reservoir.