Odisha to conduct sero-survey in Puri, Bhubaneswar and three other districts

With the ongoing Rath Yatra festival in focus, the Government has decided to launch the mass testing of people in the temple city of Puri from Saturday.

BHUBANESWAR: The surge in Covid-19 cases has prompted Odisha Government to go for sero-survey of people to ascertain the extent of spread of the virus in the hotspots of the State.

With the ongoing Rath Yatra festival in focus, the Government has decided to launch the mass testing of people in the temple city of Puri from Saturday. Once it is completed, four other districts will be taken up in the second phase.

The survey will be conducted by the Regional Medical Research Centre (RMRC) in Ganjam and Gajapati districts along with the Capital city of Bhubaneswar and Baramba-Narsinghpur block of Cuttack district from July first week. Around 1,500 cases have been reported from these districts in the past two months.

The sero-survey involves testing blood serum for antibodies which will help determine if a person is COVID infected and has had any such infections in the past. After a high-level meeting here on Thursday, Additional Chief Secretary PK Mohapatra said Puri has been chosen for the survey in view of the ongoing Rath Yatra.

“The anti-body test will be conducted among various categories of people. It will be over and above the 5,000 RT-PCR tests planned in the next few days,” he said.

The sero-survey would be conducted among high risk or vulnerable populations, including health care workers, frontline workers, immuno-compromised individuals and in containment zones.

It will help understand the proportion of population exposed to infection with SARS-CoV-2 including asymptomatic individuals. Depending upon the level of seroprevalence of infection, appropriate public health interventions can be planned and implemented for prevention and control of the disease. 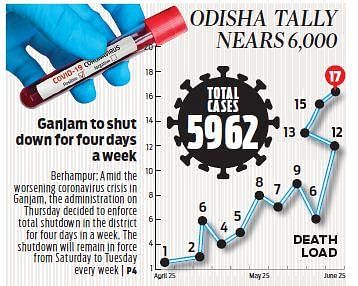 The State Government has also planned for rapid antibody tests in all 30 districts in Odisha. Mohapatra said a proposal for 50,000 rapid test kits has been placed before the ICMR.

“We will decide for the test schedule once the kits reach here. The tests would be conducted at the point of care in all headquarters hospital,” he informed. A decision was also taken to set up COVID testing facilities in five districts - Puri, Keonjhar, Kalahandi, Angul and Jharsuguda besides ramping up existing labs at all Medical Colleges and RMRC, Institute of Life Sciences and International Centre for Foot & Mouth Disease (ICFMD), Bhubaneswar.

Bhubaneswar: The State Government is set to cap the Covid-19 test price in private hospitals and laboratories at Rs 2,200. The private facilities, at present, are charging Rs 4,500 per test.

The ICMR had written to the states insisting that with availability of testing kits, they can lower the price cap of Rs 4,500 fixed for Covid-19 diagnostic tests in private labs.

States were advised to negotiate with private labs and fix up mutually agreeable prices for individuals desirous of testing by these labs. ACS of Health department PK Mohapatra said a notification in this regard would be issued in a day or two.