SFA attributed the abandoning of the pets to fake news being circulated on social media.

BHUBANESWAR: Canards on COVID-19 being transmitted from animals to humans has led to abandoning pets in the Twin City. An animal welfare organisation, Speak for Animals (SFA), on Saturday received two calls about abandoning of a Spitz in VSS Nagar area of the Capital and a Labrador near Barabati Stadium in Cuttack.

SFA attributed the abandoning of the pets to fake news being circulated on social media. 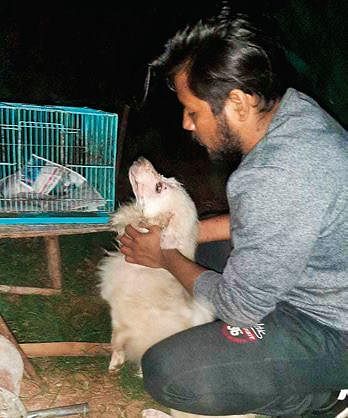 “We received two phone calls between 11 pm and 1 pm. On receiving the information, three volunteers with food and a cage followed Spitz for some distance and rescued the dog near Rasulgarh,” said SFA’s chairperson, Kusal Biswas.

However, we spent over an hour near Barabati stadium to trace the Labrador but to no avail. Usually, SFA receives one or two calls in a month about dogs being abandoned either for age-related issues, skin disease or for their aggressive behaviour.

Odisha Skill Development Authority (OSDA) Chairman Subroto Bagchi on Saturday urged people not to abandon their pets over coronavirus scare. “If we would not think of abandoning a ‘human’ family member, how can we abandon a pet?,” said Bagchi in a tweet.


United States Centre for Disease Control and Prevention has clearly said there is no evidence that pets spread coronavirus.

Do not snuggle, lick, share food when in home quarantine but do not leave them on the road. Your pet is your own child, he added.

The State Housing and Urban Development department also endorsed Bagchi’s message and shared it on its Twitter handle.SFA’s Kusal blamed the fake news behind such panic-induced incidents.

“People should understand that COVID-19 is spreading from humans to humans and not from animals to humans. There is no threat from wild or domestic animals,” he said.