Over 4,000 persons have registered with the Government’s online COVID-19 portal with travel history from coronavirus-affected nations.

BHUBANESWAR: As the coronavirus spread sees a surge in the country, the Digital Response System, launched by Odisha Government, has helped it deal with the crisis by reducing pressure on the existing healthcare system of the State. 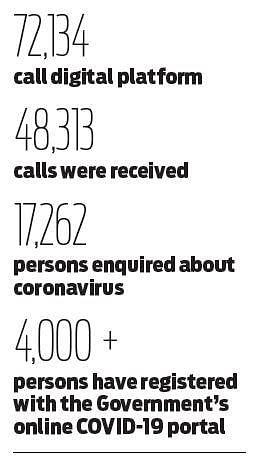 Going by available statistics, as many as 17,262 persons, who contacted the digital response platform, enquired about coronavirus. The rest callers asked about a host of other subjects related to common cold, cough and common flu symptoms.

“People, naturally concerned with the pandemic situation, have been enquiring about even minor health issues which are dealt by the digital response platform equipped with half a dozen doctors to address their issues. That way, not everyone feeling vulnerable ends up at Government hospitals adding to pressure because they are screened at one level and advised accordingly,” sources said. Such a system is being used for the first time in disaster management.

As of now, the low case load has presented some relief for Odisha. Two cases have tested positive against test of 133 samples. Over 4,000 persons have registered with the Government’s online COVID-19 portal with travel history from coronavirus-affected nations.

Though it is way too early to form any kind of conclusion on the infection rate in the State, the Digital Response System has given Odisha administration clarity in dealing with the ongoing crisis. It has helped the Government not put additional pressure on its existing health system which is known to grapple with poor infrastructure, inadequate critical care support and large-scale absence of doctors.

“We have been able to map the entire set of people who feel they are in the risk zone and calling us. From those returning from coronavirus-affected countries to others who have travelled from different parts of the country where cases have been reported, we have a fair bit of idea about where to keep our focus because we have the analytics,” sources said. While the online portal generates data about people who have registered for having a travel history, the digital system goes about contacts tracing and screens a bigger set of individuals and keeps them from crowding the healthcare system.

Stay up to date on all the latest Odisha news with The New Indian Express App. Download now
(Get the news that matters from New Indian Express on WhatsApp. Click this link and hit 'Click to Subscribe'. Follow the instructions after that.)
TAGS
Odisha Coronavirus crisis coronavirus