Additional Chief Secretary (Health) PK Mohapatra has asked all Collectors and Municipal Commissioners to ensure that the activities permitted as per classification of zones are followed strictly.

BHUBANESWAR: With Odisha entering lockdown 3.0 from Monday, the State Government on Sunday issued a notification, categorising districts as red, orange and green zone basing on the last confirmed Covid-19 case and number of patients.

According to the notification issued by the Health and Family Welfare department, COVID-19 hotspots Jajpur, Bhadrak, Balasore, and Bhubaneswar Municipal Corporation (BMC) in Khurda district come under the red zone. While Jajpur has the highest 48 cases, the Capital city of  Bhubaneswar has 47, Balasore 21 and Bhadrak 19.

Additional Chief Secretary (Health) PK Mohapatra said as per the Union Ministry of Health and Family Welfare guidelines, municipal corporations within a district along with other areas of such districts and corporations can be treated as separate units.

“We have bifurcated Khurda district accordingly. While BMC comes under red zone, rest of Khurda district is in orange zone. The red zone classification is important to ensure critical interventions for focused management of Covid-19 at the field level,” he clarified.

In buffer zones (areas outside the containment zone in red category), extensive surveillance for cases through monitoring of severe acute respiratory infections (SARI) and influenza like illness (ILI) will be intensified, he stated.

Mohapatra has asked all Collectors and Municipal Commissioners to ensure that the activities permitted as per classification of zones are  followed strictly. "The classification of zones is for the week starting from Monday. If any district in green zone reports a positive case in between, it will be treated as orange," he added. 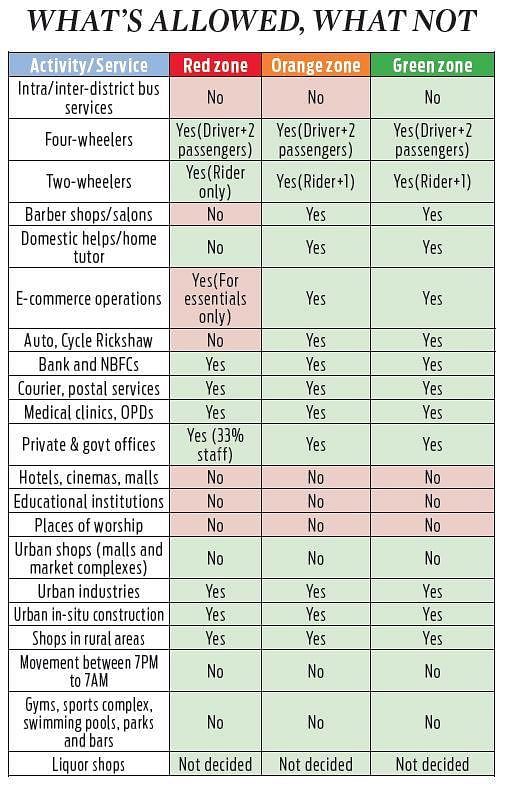