Tiger and elephant being highly endangered wild animals, Pradhan said the Narendra Modi Government has been according priority for their conservation.

Tiger and elephant being highly endangered wild animals, Pradhan said the Narendra Modi Government has been according priority for their conservation.The Ministry of Environment and Forest has provided over Rs  36 crore to the State in 2019-20 and 2020-21 for conservation of tiger and elephant. 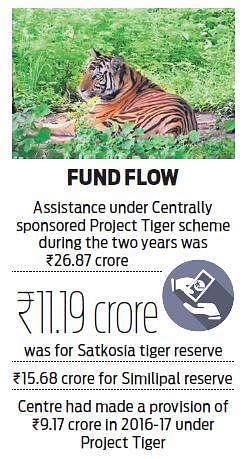 The assistance under the Centrally sponsored Project Tiger scheme during the two years was Rs  26.87 crore out of which Rs  11.19 crore was for Satkosia tiger reserve and Rs  15.68 crore for Similipal reserve.

The fund for Project Tiger in the Union budget was increased from the revised 2019-20 figure of Rs  282.57 crore to Rs  300 crore during the current fiscal.

Similarly, the Centre has provided Rs  9.68 crore under Project Elephant which he said will help the State Government to deal with the man-elephant conflict firmly.

“Over Rs  35 crore has been released to Odisha by GOI between 2019-21 under Centrally sponsored schemes for tiger and elephant conservation. Modi govt’s consistent efforts are ensuring that tigers continue to roar in the jungle,” Pradhan tweeted.

Consistent efforts towards environmental sustainability and conservation of wildlife under the leadership of the PM and Union Environment and Forest Minister Prakash Javdekar have become a trailblazer for the revival of endangered animal species, like tigers and elephants in India, he added.

The Union Minister said the key initiatives undertaken by Modi Government include efforts to increase forest cover, compensatory afforestation, green skill development which are helping create a nature-friendly eco-system and generating new opportunities for our youths.

Now we are on Telegram too. Follow us for updates
TAGS
Odisha Project Tiger Project Elephant Dharmendra Pradhan