BHUBANESWAR: With only 27.15 per cent (pc) of the rural population having access to tap water so far, the State government has planned to provide functional tap connection to all households by 2024.Putting the number of rural households at 85.66 lakh, the government claimed to have covered 23.25 lakh under tap water connection.

Submitting its Jal Jeevan Mission (JJM) annual action plan to the Centre, the State has set a target to achieve 100 pc coverage by 2024. Only 3.63 pc of the people of the State had access to tap water when JJM launched on August 15, 2019. 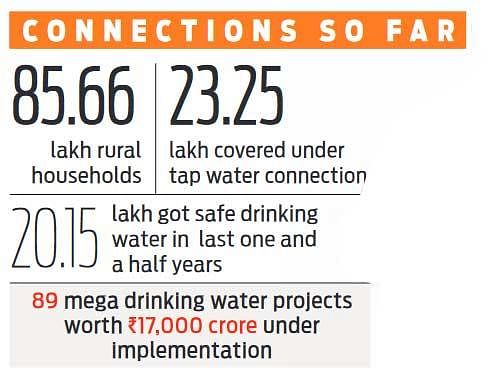 As many as 89 mega drinking water projects worth Rs 17,000 crore for rural areas are under implementation. After a recent review on drinking water supply position, the Chief Minister had said, “We are working towards ensuring 100 pc piped water supply connection to all rural households by 2024. In the urban areas, we have spent more than Rs 3,800 crore in the last 3 years alone. It is planned that all the urban households will be provided with piped water supply by 2022.”

The State has heavily funded in training of self-help group members to conduct water quality surveillance, sanitary inspections of 4.64 lakh drinking water sources across the State. It is an important surveillance mechanism to test the water sources and end point, the annual action plan said.

Now we are on Telegram too. Follow us for updates
TAGS
tap water Tap connection drinking water