Ancient artifacts emerge from the ‘Mo Pokhari’ site in Odisha

Labourers engaged in digging a pond at Asiagarh village in Barachana block were in for a surprise after they stumbled upon ancient stone artifacts from the site on Monday.

JAJPUR: Labourers engaged in digging a pond at Asiagarh village in Barachana block were in for a surprise after they stumbled upon ancient stone artifacts from the site on Monday. 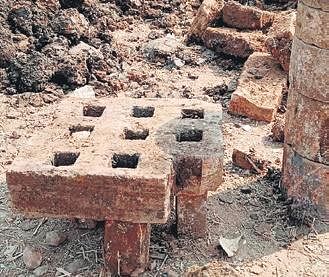 The pond was being dug under the State government's Pokhari scheme. After digging about five feet, the laborers spotted stones with artistic engravings on them. On further excavation, other stone structures were found.

The workers immediately stopped digging and informed the landowner about the discovery. Kamal Lochan Jena, a laborer, said, “The artifacts are round and square in size. Some kind of artwork has been engraved on these structures.”Historian and Buddhist researcher Dr Harish Chandra Prusty said it seems, the stone artifacts are from the 18th century.

These are believed to be built by the then king of Asiagarh as the excavation site is in the vicinity of the royal palace. However, the real facts will emerge after an investigation by the Archaeological wing, he added. On Tuesday, police reached the spot and stopped the digging work of the pond.

Now we are on Telegram too. Follow us for updates
TAGS
Asiagarh village Mo Pokhari site