While the protests were on, a vehicle of Pirahat police outpost carrying an accused was passing by the route.

BHUBANESWAR: A 22-year-old youth’s fear of police ended in his death in a village of Tihidi block in Bhadrak district on Wednesday. Irked, locals set afire the police vehicle at Alinagar Chowk within Tihidi police limits in the district.Sensing trouble at the sight of police who visited his home to interrogate his brother-in-law, the victim, Bapi Mahalik, started running. Even police, due to mistaken identity, chased Bapi till he took a plunge into a pond and got into heavy algae and drowned. 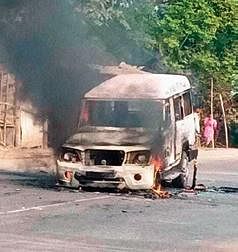 It so happened that Bapi was shocked to see police who were at his house to question his brother-in-law, Ashok Malik in connection with an old case. Bapi was so scared that he started to run and the personnel chased him presumed him to be Ashok. The youth then jumped into a pond and tried to swim. However, he was trapped in algae and drowned. The incident irked the locals who staged a protest and blocked Bhadrak-Chandbali road near Alinagar for two hours in the afternoon.

The protestors, who placed Bapi’s body on the road, also burnt tyres. While the protests were on, a vehicle of Pirahat police outpost carrying an accused was passing by the route. While the personnel in the vehicle were unaware of the protests, locals assumed they were from Tihidi police station and vented their ire on the vehicle. Ashok had assaulted police personnel a few days back when they had visited his house to question him. “Bapi’s relative is an anti-social and we had conducted several raids on his house but failed to nab him. We had no plan to question Bapi but he attempted to flee on seeing us,” said Tihidi police.