It’s something straight out of a sci-fi movie! A startup firm has developed a smart safety bullet-proof jacket, capable of sensing attacks on the wearer and communicating location of the enemy to fell

CHENNAI: It’s something straight out of a sci-fi movie! A startup firm has developed a smart safety bullet-proof jacket, capable of sensing attacks on the wearer and communicating location of the enemy to fellow troop members, for Border Security Force soldiers.

Once a bullet hit a solider wearing the jacket, gadgets embedded in it would immediately send electronic signals to other troop members, fellow army units in the region and the base camp about the attack, along with the exact location of the enemy, using the secure LoRa technology. This would enable the army to take evasive action and neutralise the attackers. 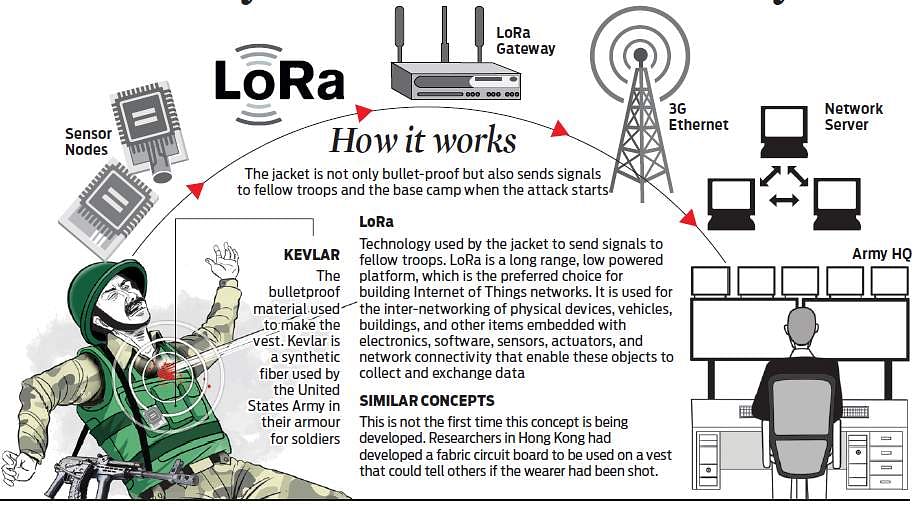 Assam Rifles, the country’s oldest paramilitary force, has already shown interest in the technology.
The prototype safety jacket was developed by Ajay Sangwan, a fashion designer; Rohit T and Vivek Jose, who are electronic engineers. They co-founded Nyoka Technologies Limited, which has been incubated at Kochi’s Maker Village electronics incubator after the idea got the backing of the Union Ministry of Electronics and Information Technology (MeitY).

Ajay Sangwan told the Express that the product would come in handy for soldiers operating deep in jungles or high mountain ranges where there is no network. “Even if the troops are in a no-network area, the LoRa wide area network will be able to send the signals. The prototype is ready and we are looking for funding to develop a functional industrial model,” he said.

Interestingly, the jacket is fully washable, detachable and recyclable. Kevlar, the bullet-proof material, need not be purchased again if the electronics are damaged in gun battle. Geetha Tripathi, senior official in Electronic System Design and Manufacturing Group, MeitY, told Express that the product was novel and had huge potential. “Safety of the armed forces is paramount considering the danger that they are exposed to.”

The trio will be in the Indian Institute of Technology (IIT) Madras on Saturday, showcasing their product. They are seeking to incubate at IIT-M Research Park.

The young techies are also working on ways to reduce the weight of the jacket, which currently weighs about 1.5 kg. “We have identified some alloys that can be combined with Kevlar to make the product lighter without compromising on its strength. IIT-M has a Research and Development lab for textiles and we will talk to the incubator cell to see if we can use the infrastructure,” they said.

When contacted, Ashwin Mahalingam, faculty advisor, E-Cell said that the institute was open to such ideas and would be happy to incubate if all the parameters are met.

Now we are on Telegram too. Follow us for updates
TAGS
sci-fi moviecombat