CHENNAI: The reactions from the group of ministers and the family loyalists to the stinging allegations by the rebel camp was a study in contrast, with one responding with calculated equanimity while the latter breathing fire on both rebels and the ministers.

A couple of hours after senior leader of the rebel faction K P Munusamy took potshots at Lok Sabha Deputy Speaker M Thambidurai for saying that ‘Edappadi’ K Palaniswami would continue as chief minister, his former colleague R Vaithilingam, now with the ruling faction, said there was no pre-condition for holding the talks on merger of two factions. 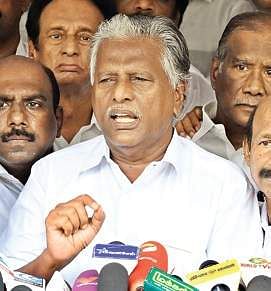 Immediately after Munusamy’s attack, senior ministers including P Thangamani held discussions at the Secretariat. Later, speaking to the media outside, Vaithilingam said a committee has been formed to hold talks on merger of two factions. “We are ready to hold talks and we wish this talks to be held on a cordial note,” he said, ignoring the serious charges levelled against the leaders.

Asked whether a new general secretary would be elected, minister C Ve Shanmugam said, “All these issues will come to an end once the Election Commission disposes of the case. The first complaint was filed by Panneerselvam faction. If they withdraw their complaint, it would be enough for ending these issues.”

But the supporters of T T V Dhinakaran were open in their criticisms, attacking both Panneerselvam and Munusamy for their moves against the family.

“I wonder whether the merger talks can happen after the insulting remarks that Munusamy made. Should we pawn 122 MLAs to the group that has a meagre 12 MLAs? If the State cabinet is corruption-ridden, were you (Panneerselvam and Munusamy) not part of that in the past?” asked spokesperson V Pugazhendi.

Turning his attention to the group of ministers who have been trying to strike a deal with the rebels, Pugazhendi added: “You have belittled yourselves (by announcing that Dhinakaran should stay away from party affairs).” Vaithilingam and Shanmugam, he added, were meek in their reaction.

Stay up to date on all the latest Tamil Nadu news with The New Indian Express App. Download now
(Get the news that matters from New Indian Express on WhatsApp. Click this link and hit 'Click to Subscribe'. Follow the instructions after that.)
TAGS
VK Sasikala AIADMK merger AIADMK revolt T T V Dhinakaran K P Munusamy