No light in sight for Tamil Nadu's 'powerless' villages

While almost every government report available claims a near 100 per cent electrification, reality seems to be otherwise in these remote tribal villages of the state.

COIMBATORE: As the sun retires for the night, leaving a crescent moon behind to light up the dark hilly terrain, mothers take up the onerous task of dragging their protesting children from playgrounds. The gossiping women disperse with dimming light and trudge back home, relying more on muscle memory than sight. Darkness is palpable in the hilly hamlets of Sullimettupatti in Anaimalai, Dhumanur in Anaikatti and Singarapatti in Aliyar. Lost in the din of the official chest-thumping about 100 per cent electrification is the clamour of these villagers for power connection. The scene has not changed since 1947.

While those is nearby towns and faraway cities grapple with first-world problems like slow internet and load-shedding, people in inhospitable hilly terrain rush home before nightfall to ensure their sole source of light — lanterns — are fuelled for the haul. The plight of these villagers stand in stark contrast to what the officials claim is the reality: that there is no house without power connection.

According to 2011 census, there are about 15,049 inhabited villages with as many as 102.85 lakh households in the State. Data collected from All India Village Household Electrification Dashboard states the number of villages and households yet to be electrified in the State, as on May 31, is zero. However, a report by Ministry of Power claims, as of March 2016, the State has achieved almost 100 per cent village electrification. It adds there are about 5,787 remote households, where power would be arranged via off-grid solutions. 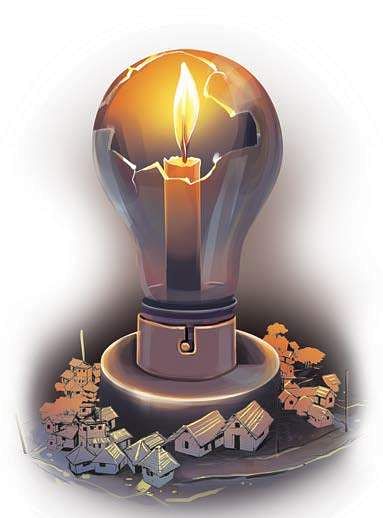 Even in Shembukarai, where government installed a few transformers a couple of months ago, only two houses have complete power supply, says M Rangasamy, a resident. “Even though MLA V C Arukutty paid the deposit on behalf of all 30 families living in the village, residents have no money to pay for wiring connection. All houses in the village have a single LED bulb, which is powered by electricity generated from solar panels,” he says.

D Mailan, a resident of Dhumanur, says that even though Dhumanur is just a few kilometres away from Shembukarai, the 130-odd families here have no power connection, despite repeated requests. A similar story is narrated by A Kaleeswari, of Sullimettupatti four kilometers away from Anaimalai. Households in her village are yet to get power connection, she claims.

V S Paramasivam, district president of Tamil Nadu Tribal People’s Association, says that the difficulties in providing electricity connections to the tribal settlements deep inside forests is understandable, but not giving connection to the three tribal settlements in question near Sarkarpathy power house militates against logic.

While the clamour gains pitch, officials harp on old promises of looking into the issue. TANGEDCO Superintending Engineer, Coimbatore (North), J Kalaiselvi says that the Department has processed all the applications and the work is under process.

“Only after receiving the proposal would we be able to proceed. A few months ago, power was ensured to Shembukarai. A scheme has been sanctioned to provide electricity to Dhumanur, which 1.5 km deep in the dense forest,” she adds.