Tuesday was a red-letter day in the annals of the Madras Regimental Centre, Wellington, as its Naib Subedar Arokia Rajiv was honoured by the President of India in New Delhi with Arjuna Award.

COONOOR: Tuesday was a red-letter day in the annals of the Madras Regimental Centre (MRC), Wellington, as its Naib Subedar Arokia Rajiv was honoured by the President of India Ram Nath Kovind in New Delhi with the prestigious Arjuna Award for his outstanding contribution in Athletes.

“This award to serving army personnel is a matter of great pride for the entire Indian Army, his unit and family,” a release from the MRC said.

Naib Subedar Arokia Rajiv becomes the second Arjuna Awardee from the Madras Regiment after Havildar Peter Thangaraj who had received the Award for his outstanding achievements as India’s football goalkeeper.

Enrolled into the regiment on March 15, 2011, Arokia Rajiv hails from Tiruchirappalli district. The MRC had periodically rewarded him with ‘out-of-turn’ promotion for his sporting achievements. His first major achievement was winning gold at Open National Athletic Championship in 400 metres race.

Thereafter, he had won many titles in National and Inter-services Athletic 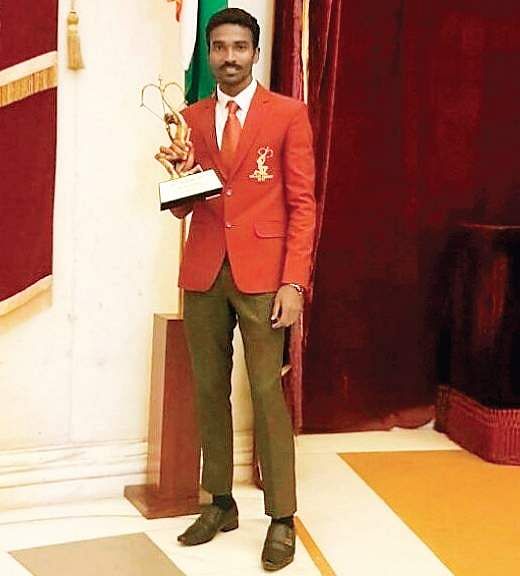 On the international sporting arena, he had bagged Bronze at 17th Asian Games in Incheon, Korea in 400 metres and Silver in 6th World Military Games in South Korea in the same event.

His  road to success began from Chennai after he won the gold medal at Open National Athletics Championship here on September 10, 2012 in 400  metres run. The highest point of his sporting career came when he qualified for Rio Olympics in 4 x 400 meters relay at the Indian Grand Prix held at Bangalore by securing gold medal.

The chief minister, in separate letters to the sportspersons, hailed their achievements and wished them many more laurels in the future.