Weatherman says Nellai, Kumari would be battered for the next two days; Ockhi now 90 km north of Minicoy

CHENNAI: The Meteorological Department has forecast that rain in Kanniyakumari, Tirunelveli and Thoothukudi which bore the brunt of cyclone ‘Ockhi’, will continue for 48 hours, although the cyclone has moved into the Arabian Sea over the Lakshadweep area. 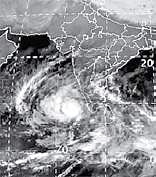 As far as South Tamil Nadu is concerned, the department data showed that 26 weather stations had recorded over 10 cm rain in the last 24 hours ending 8.30 am on Friday. Papanasam in Tirunelveli recorded 45 cm and Mylaudy in Kanniyakumari received 38 cm. These are the highest since 1992. The department has said that the rain is still not over yet.

S Balachandran, Director, Area Cyclone Warning Centre, told Express that only gradually the system influence will reduce. Currently, the cyclone has intensified into a very severe cyclonic storm and is likely to hit Lakshadweep Islands on Saturday with gale speed reaching 145 kmph.

“The cyclonic storm is about 90 km north of Minicoy and 220 km south-southeast of Amini Divi. The system is very likely to intensify further during next 24 hours. It is very likely to continue to move west-northwestwards across Lakshadweep Islands during the next 24 hours and then move north/northeastwards during the subsequent 48 hours,” the department bulletin said.

As far as Chennai is concerned, there would be rain following winds. The much talked about depression that is brewing in the Bay of Bengal that would impact Chennai, currently lies as a well marked low pressure area over South Andaman sea and adjoining Strait of Malacca. Associated cyclonic circulation extends up to 5.8 km above mean sea level. It is very likely to become a depression during next 48 hours. It is very likely to move towards North Tamil Nadu-South Andhra Pradesh coasts during next 3-4 days, Balachandran said.

The official also said that the system is at the eastern end of the Bay and North Tamil Nadu is in the western side. “So, the system has a long journey to make. In the process, many changes can take place. Whether, the system will intensify into a cyclone and where it is travelling is being monitored very closely,” said.