Flooded by nature’s fury, they search for succour

Over 2K officials engaged in relief works in the cyclone-hit Kanniyakumari district; as many as 162 houses fully damaged and 540 partially damaged

NAGERCOILL: Even as rescue efforts were in full swing on Saturday following the fury unleashed by Cyclone Ockhi, uncertainty loomed large on the fate of 12 fishermen missing in the sea off Kanniyakumari coast. While 2,107 officials kept tab on relief measures, Dornic 760 helicopters flown in from Chennai upped the tempo of the mission. The 12 missing fishermen reportedly went overboard off a small vessel, while three of the crew reached safely ashore at Vizhinjam.

Good news trickled down to the fishermen families ashore, awaiting their dear ones trapped in the slipstream of Lakshadweep-bound Ockhi, when disaster management personnel confirmed the rescue of 218 fishermen from Nagercoil and their eventual evacuation to Thiruvananthapuram. There were reports of 60 fishermen being rescued and taken to Thrissur in Kerala as well.

However, there was an element of doubt surrounding the fate of 15 fishermen, who their colleagues confirmed as drowned. While South Asian Fishermen Federation (SAFF) sources relied on the tales of high-velocity wind throwing people overboard, there was no official word.

Meanwhile, six rescue teams comprising 200 members each were roped in from Virudhunagar, Madurai, Theni, Dindigul and Sivaganga districts to assist two NDRF teams,  consisting of 65 personnel, to oversee rescue operations in Thuckalay and Nagercoil. Round-the-clock medical assistance was being made available to the cyclone-hit through 64 teams while 75 shelters under the care of seven officials were kept at the ready for the evacuees.

As on Saturday, 52 people had been rescued by the Fire and Rescue team. While the extent of the individual property damage is yet to be fully assessed, initial estimate pegs the number at 162 fully-damaged houses and 540 partially-damaged. In the 18 relief camps operational in the district, 1,116 people were taking refuge.

According to the police, SDRF and NDRF teams were spreading out to remove damaged transformers and uprooted tress in the district. Coast Guards were relying on helicopters to identify and rescue fishermen from the sea. The search area is set to widen with officials planning to comb through the coastline between Thoothukudi and Chennai.

Life was thrown out of gear in the district due to the cyclone. In Sengottai area, a breach developed in one of the sluices of Kottakulam on Saturday, leading to floods in the vicinity. Steady flow from Gundar surpassed the strength of Kottakulam, leading to the incident and repairs were on. Meanwhile, hours after the collapse of a bridge at Thirukurungudi, marooning over 10 villages, a 100-metre-long crack developed alongside a road next to Thirukurungudi Periyakulam which forced the local authorities to divert the traffic. The crack triggered panic among the locals, who feared the crack may weaken the pond and inundate farmlands. 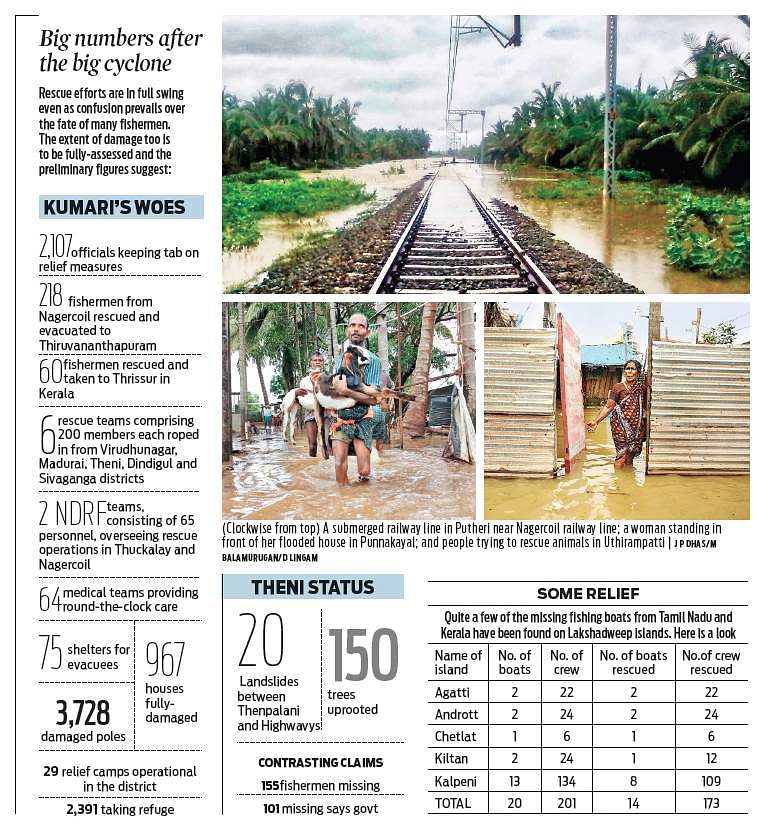