More than 900 schools in Tamil Nadu without Head Masters

PUDUKKOTTAI: Even as the State government is implementing several initiatives to improve the quality of school education and success rate of students, it has emerged that 950 posts of high school headmasters, five chief education officers (CEOs) and 35 district education officers (DEOs) have been vacant for more than six months.

The issue figured in the general body meeting of Tamil Nadu Government High and Higher Secondary School Headmasters Association, held in Velankanni recently. The association adopted a resolution urging the government to fill the vacancies at the earliest.

A headmaster who took part in the meeting told Express that vacancies of DEOs and District Elementary Education Officer (DEEOs) posts are filled with 35 per cent of postings from higher secondary headmasters, 40 per cent from high school headmasters and 25 per cent by selection through TNPSC Group 2 examination.

The posting for DEOs and DEEOs would be completed by March every year, but has not happened this year. The worrying fact is that at least one DEO has been retiring every month adding to the pile-up of vacancies, the headmaster claimed. Many headmasters have retired without getting the DEO’s promotion, despite having proper qualification, he claimed.

With most of the posts vacant, headmasters are asked to double up as DEOs. This adds to their work load and they cannot concentrate on their designated schools. Incharge DEOs and HMs face several problems in carrying out their responsibilities.” Attempts to contact School Education Director R Ilangovan proved futile as the official did not respond to calls on his mobile or text messages. 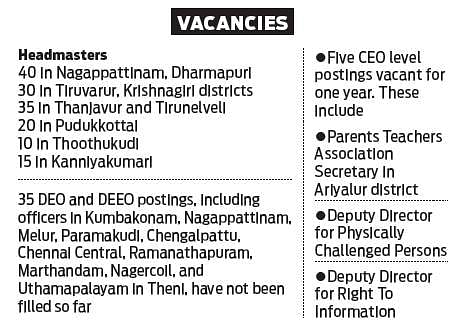 Stay up to date on all the latest Tamil Nadu news with The New Indian Express App. Download now
(Get the news that matters from New Indian Express on WhatsApp. Click this link and hit 'Click to Subscribe'. Follow the instructions after that.)
TAGS
State government head masters schools