No word yet on fate of migrants on 20 fishing boats

The fate of migrant labourers on board the missing vessels from Vallavilai and other coastal villages at Thoothoor in Kanniyakumari district is not known.

NAGERCOIL: The fate of migrant labourers on board the missing vessels from Vallavilai and other coastal villages at Thoothoor in Kanniyakumari district is not known.

Vallavilai Parish priest Fr Darwin told Express that the migrant workers from other States such as Assam and West Bengal were on board the missing mechanised boats, owned by people from eight coastal villages in Thoothoor.

He said that most of the migrant workers, who had gone for fishing, were not fishers by profession. They had earlier worked as construction labours. 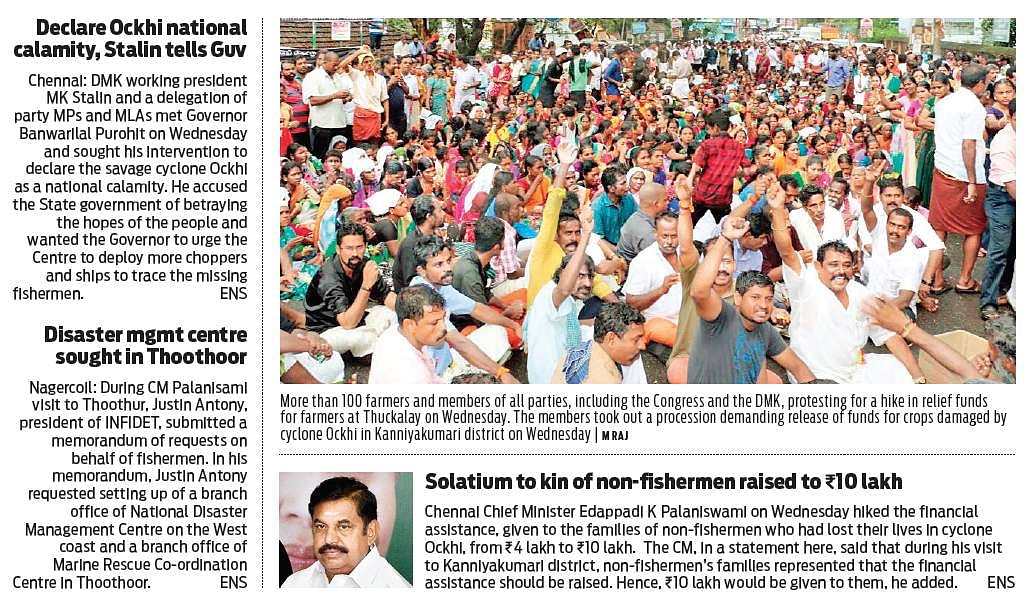 Fr Darwin said that the boats from Thoothoor area mostly sailed from Kochi. Other boats sailed from the Thengapattinam and the Malappa coast.

He noted that of the close to 20 missing boats from Vallaviali, the migrant labourers were in a few of them and most of those boats ventured from the Kochi harbour.

“But we do not know their names and addresses,” he said. Only the fishermen in the boats knew their names, but all of them and their boats are missing, he said. What made the situation more grim was that the relatives of the migrant workers might not have been aware that they had gone for fishing, Fr Darwin said.

A fisherman, M Arokiaenico, a partner of a mechanised boat from Thoothoor, said that around 12 persons went for fishing in the boat that sailed from Kochi harbour before Ockhi hit. Of the 12, four were migrant workers from Assam, who had come to help us in fishing.

“Though our boat got caught in the the cyclone, we reached an island in Lakshadweep after a titanic struggle. We were given good treatment there by the authorities. We, including the migrant workers from Assam, returned to Kochi in the same boat,” he said. Arokiaenico added that before boarding, the migrant workers might have spoken to other migrant workers of Kochi or to their families. “We do not know how many of them are missing,” he said.

Another fisherman, Jelvis of Thoothoor said that he and other fishermen from the area and two from Assam had gone ventured from Kochi.

“After a hard struggle we, including the migrant workers returned,” he said. But two Assamese workers, who had gone along with other fishers from Thoothoor in a mechanised boat that set sail from Kochi before the cyclone, had gone missing, he added. The fisherman said that migrant workers from Assam, West Bengal and other Northern States set sail in a few boats to help the fishermen from the district. “But we do not know what happened to them,” he said.

When contacted, a senior official of the Tamil Nadu Fisheries Department said that as per  available data of the missing fishermen, who had mostly sailed from the Kanniyakumari coast, four were migrant workers from Assam. We are in the process of collecting further details, he said.

Stay up to date on all the latest Tamil Nadu news with The New Indian Express App. Download now
(Get the news that matters from New Indian Express on WhatsApp. Click this link and hit 'Click to Subscribe'. Follow the instructions after that.)
TAGS
cyclone Ochki missing fishermen