‘Hey Bharatha Matha! Look how your daughters are being molested’

CHENNAI: Holding that crimes against women and girl children are shockingly rising every year and most urgent measures have to be taken to effectively check the same, the Madurai Bench of the Madras High Court has raised a set of 25 questions to be answered by the State and Centre.

“Hey Bharatha Matha! Look how your daughters are being molested, sexually assaulted and murdered by some of the devilish creatures roaming in your land. The said culprits could neither be termed as human beings nor as animals, as even animals are noble in their own way,” exclaimed Justice N Kirubakaran, while passing interim orders on a bail application from two accused in a case of rape and murder of a 60-year-old mentally challenged woman, on December 15.

Listing the rape cases reported in the media, starting from a-few-month-old-girl-child and a 100 year-old-woman, including the episode relating to Nirbhaya, the judge observed that this showed that the horrific and gruesome crimes are occurring unabated putting a question mark over the safety of women in India, in spite of many stringent laws. It is shocking and heartening to learn that even toddlers are raped, the judge bemoaned.

Coming to the case, the judge said it is a shame that a 60 year-old mentally challenged woman was stated to have been gang-raped and murdered by Andrews and Prabhu and two other juveniles on November 10, 2016. This case, registered by Koodankulam Police in Tirunelveli district, only reflected as to how women in Indian society continued to be harassed in spite of many stringent laws. The judge said and issued a set of 25 queries to be answered by the State and Central governments.

The judge also suo-motu impleaded the Centre, by its Secretaries of Ministries of Home Affairs, Women Welfare and Child Development and National Council for Women, New Delhi, besides the State Home Secretary and DGP as party respondents in the case. 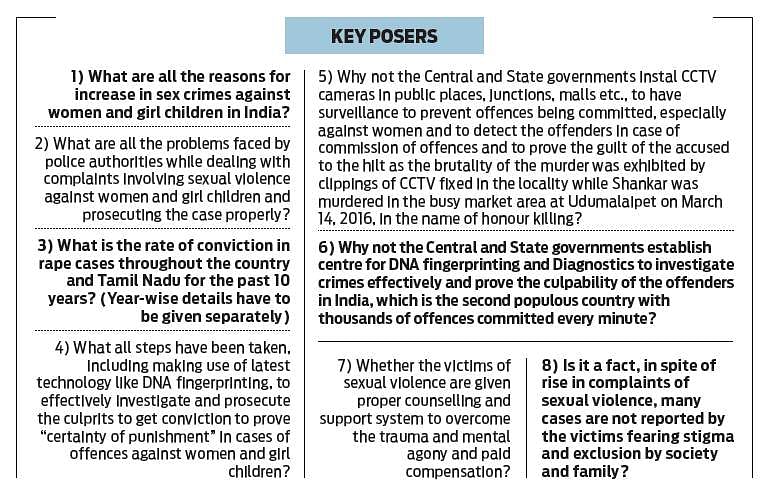