Struggle for survival is the rule of nature and for sea turtles, that struggle begins even before they take birth.

VILLUPURAM: Struggle for survival is the rule of nature and for sea turtles, that struggle begins even before they take birth. The discovery of hundreds of damaged turtle eggs on the seashore near Marakkanam portrayed this struggle when a group of environmentalists stumbled upon them on Sunday morning. 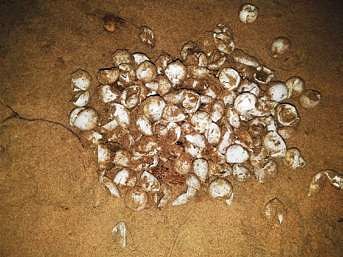 During a routine turtle watching mission, activist Sarveshkumar and his team noticed around 120 turtle eggs with their yolks removed, at Naravakkam on Theerthavary seashore near Marakkanam. Upon close inspection, the team found foot prints of a man and a dog. There were also marks on sand which indicated that the man had dragged a turtle to a distance before collecting her eggs from the pit.

Since it is difficult to locate eggs once the female turtle covers the pit with sand, egg-hunting persons keep a close watch on the sea shore to spot turtles laying eggs.

The activists suspect that some miscreants might have collected egg yolks for consumption.
Popular among outsiders as a salt production hub, Marakkanam is a favourite nesting spot for turtles. Travelling for thousands of kilometres, as farther from the coastal Africa, turtles reach here during winters to lay eggs. Usually the eggs take two to three months to hatch, and the hatchlings move to the sea themselves without anyone’s help. But in recent years, large number of eggs are being either stolen for food or damaged by drunkards.

Meanwhile, Villupuram District Forest Officer Rahul said the department had already taken steps to safeguard the eggs. On Saturday, they collected 290 eggs and kept them in a hatchery unit. He assured of inquiring about the Naravakkam incident and arranging patrolling there.

Stay up to date on all the latest Tamil Nadu news with The New Indian Express App. Download now
(Get the news that matters from New Indian Express on WhatsApp. Click this link and hit 'Click to Subscribe'. Follow the instructions after that.)
TAGS
marakkanam turtle poachers