A day after being acquitted in the 2G spectrum allocation scam, former telecom minister A Raja thanked his mentor and DMK chief M Karunanidhi for protecting him like ‘an embryo in the amnion’

CHENNAI : A day after being acquitted in the 2G spectrum allocation scam, former telecom minister A Raja thanked his mentor and DMK chief M Karunanidhi for protecting him like ‘an embryo in the amnion’ and stated he was placing the verdict at his feet. The ex-minister did not spare the Congress for ‘failing to realise the plot’ woven to unseat the UPA government.In an emotionally choked epistle written to Karunanidhi on Friday, Raja said, “I revere you by placing the verdict at your feet. I am grateful to you for protecting me as much as an embryo covered in the amnion is by a mother.”

Recalling how Karunanidhi and his son and working president M K Stalin, had given him the lifeline when in severe stress and on the verge of political obscurity, he said their words of encouragement relieved him of mental depression and stress.Extraordinary wisdom is not needed to understand the fact that certain vested interests that could not bear the political clout the DMK, a State party, had wielded in the national politics, were behind it, he said. 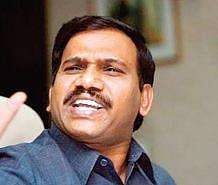 Launching a strong attack on Congress over the 2G case, Raja said, “It was a shame that the then government couldn’t grasp the fact that spectrum was caught entrapped in the plot to unseat the UPA government.”Claiming that he broke the telecom cartel revolutionise the sector to make social media a reality, the former minister described it was strange that he was imprisoned.

Invoking the slogans of the late chief minister C N Annadurai, Raja said his words could be used as balm for healing the wounds, but who would punish those who belittled the 80 years of public life of Karunanidhi. Raja did not spare even the Leftists when he said it was an ideological tragedy that they too politicised the spectrum controversy.