MGR got equation right with Centre to get State fair share of benefit, influence decisions

As Tamil Nadu observes the 30th death anniversary of its late Chief Minister MG Ramachandran, fondly called as MGR, it is perhaps relevant to look at his political equations with successive Central go

CHENNAI: As Tamil Nadu observes the 30th death anniversary of its late Chief Minister MG Ramachandran, fondly called as MGR, it is perhaps relevant to look at his political equations with successive Central governments between 1977 to 1987. MGR was Chief Minister of Tamil Nadu for around 11 years and during that period, the country had four Prime Ministers —Morarji Desai, Charan Singh, Indira Gandhi and Rajiv Gandhi. With all of them, MGR tried to maintain good relations.
Panruti S Ramachandran (81), a close associate of MGR, and one of the key decision-makers in the late CM’s government, observed that MGR’s policy paid dividends to the State. 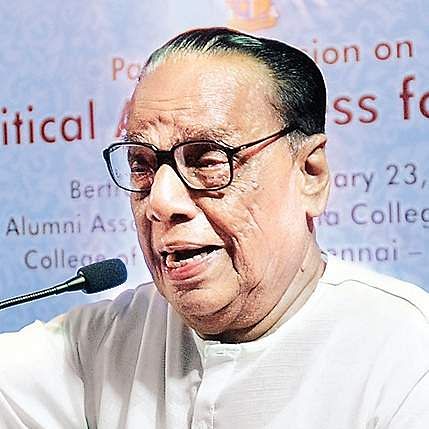 “In my view, MGR’s line of thinking  was this: ‘After all, my political enemy is DMK.  So why should I antagonise all the others?’ Also, with every move, he wanted to isolate the DMK while cultivating friendly relations with all other parties. That was his strategy.”“Basically, MGR never wanted a confrontational approach with the Centre. In this regard, he didn’t mind ideological differences either. On one occasion, he told me that since he had no ambitions of becoming the Prime Minister of the country as some other CMs had, he would have cordial relationships with the Centre, no matter who becomes the PM. In 1977, he had alliance with Indira Gandhi for Lok Sabha elections. But when Janata party formed the next government with Morarji Desai as PM, MGR maintained close relationship with Desai. In the ensuing Assembly elections in 1977, he did not have any alliance with the Congress,” he observes.

“Similarly, when the Desai government fell, though he supported Morarji, he joined the government headed by Charan Singh with two ministers from AIADMK. Later, in the next Lok Sabha elections, MGR went with Congress led by Indira Gandhi and the ties continued with Rajiv Gandhi after he became Prime Pinister following his mother’s death.”

MGR’s policy was neither doctrinaire nor self-seeking — like wanting to becoming the Prime Minister. For instance, NT Rama Rao wanted to become the Prime Minister and even convened a conclave of opposition parties in Vijayawada in 1983 and openly declared that he wanted to be next Prime Minister on behalf of the opposition parties. MGR and Ramachandran had even attended that conclave.
Had this ‘don’t-antagonise-centre’ policy helped Tamil Nadu in anyway? Ramachandran believes so. “Successive governments at the Centre were very cooperative with MGR. Tamil Nadu got more allotments in terms of rice etc., When it came to influencing the Planning Commission or Finance Commission, sanctioning of projects and allotment of coal, Tamil Nadu benefited because of MGR’s policy.”

“When the Sri Lankan Tamils issue came up, it was solely in the domain of External Affairs Ministry. But our relationship with Delhi was so cordial that we were able to influence foreign policy. Without our concurrence, the Centre did not do anything. So his policy helped the Tamils in Sri Lanka,” Ramachandran says.

Ideology too played its part

Says Dr HV Hande (91), who was close to the late leader and was health minister in the cabinet, “MGR believed that having a cordial relationship with Centre is good for the State. Due to the relationship, financial grants to the State were always good. Whatever MGR demanded for the State was granted. In that way, we benefited a lot.”

On MGR’s decision to join the government headed by Charan Singh after the fall of Morarji Desai government, Hande observes: “MGR wanted to prove that he has given life to the slogan raised by Arignar Anna, his political mentor — Maanilathil suyatchi; mathiyil kootatchi (self-rule in State, coalition rule in Centre). For the first time, a regional party became coalition partner of the Central government. Two Ministers from AIADMK took part in the Union Cabinet — Palapazhanur and Sathiyavanimuthu. MGR thought it was a huge achievement for a political party from a State. He was so happy that when the two ministers arrived from Delhi after assuming their charges, they were given a rousing reception.”

“However, the decision to tie up with Charan Singh proved a disaster for the party in the next Lok Sabha election since the public mood was against the Janata government as well as Charan Singh government. In the eagerness  to realise the goal of Anna, he had to pay a price,” he adds.Hande recalls this with huge respect for MGR: “One of the key aspects of MGR’s political as well as film career was that he always had great faith in the people’s support for him and with that as focal point, he moved ahead.  When his government was dissolved in 1980, he just went to the people with a single question - ‘What wrong did I do to deserve this?’ And with people’s support, he returned to power.

Support for Eelam cause

Political analyst Tharasu Shyam agrees with the perception that MGR’s ties with Centre benefitted the State hugely. “The Sri Lankan Tamils issue was grabbing headlines in 1982. MGR was in his second stint as Chief Minister at that time. He took special interest in resolving the plight of Lankan Tamils perhaps because he was born in Kandy in Sri Lanka when his parents lived there. He clearly understood that without Centre’s support of the, helping the Lankan Tamils would not be possible.

“Tamil Nadu is a State in India and Sri Lanka is a sovereign country. Under normal circumstances, LTTE and other groups fighting for liberation of Tamils and a separate Eelam country  should have been regarded as terrorists in India. But they were treated as freedom fighters because of the close ties between the Centre and State governments at that time and Indira Gandhi allowed setting up of training camps for Tamil militant groups in Tamil Nadu. Even after Indira’s death, support for these militant groups continued.”

Shyam says after Rajiv Gandhi became the PM, he showed special interest in resolving the ethnic crisis in Lanka and the first talks between the Sri Lankan government and militant groups in the presence of India took place at Thimpu, the capital of Bhutan. However, the talks did not bear fruit.But in all these developments, MGR could wield his influence in helping the Tamil militants of Lanka, particularly the LTTE led by Prabhakaran.

Shyam also says the Constitution of India itself vests more powers with the Central government than the State. “As of now, good relations with Centre is the only way to gain preference for the State. Three decades ago, MGR policy had helped Tamil Nadu a lot.”