CHENNAI: It was as if a Sunday tsunami had hit DMK in RK Nagar, erasing the respect it had in the eyes of voters as the principal opposition party in Tamil Nadu. The wave of support for AIADMK rebel TTV Dhinakaran in the bypoll swept away DMK to a distant third and forced its candidate to forfeit his deposit. Whatever happened to the fabled committed voters of DMK, estimated at least 22-25 per cent? Its candidate N Marudhu Ganesh could secure only one-seventh of the total votes polled. He ended up with 24,651 votes accounting for just 13.93 per cent. 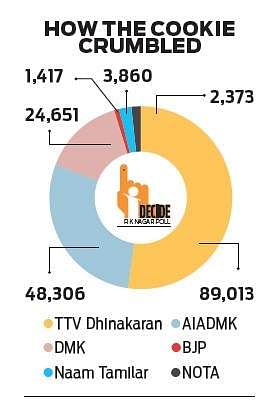 In the run up to the bypoll, party working president M K Stalin had cobbled together a huge coalition of opposition parties, which made the margin of defeat all the more shocking. In the 2016 Assembly polls at RK Nagar, DMK had put up a much better performance against incumbent CM J Jayalalithaa. Its candidate Shimla Muthuchozhan polled 57,673 against Jaya’s 97,218. The current bypoll was necessitated following the death of Jaya.

While ruling AIADMK candidate E Madhusudanan lost by over 40,000 votes, he managed to get 48,306, which was double DMK’s score. As for Stalin, he did not know what hit him. All the euphoria he had built up after the acquittal of members of his family in the 2G spectrum scam evaporated from the moment the first few rounds of results were out.

The usual buzz at the party’s headquarters, Anna Arivalayam, and the residences of Karunanidhi at Gopalapuram and Stalin at Chittaranjan Salai were missing and the rank-and-file was in complete shock. RK Nagar thoroughly exposed Stalin’s political wisdom and his ability to strategise. In fact, he hit the road for only a couple of days in RK Nagar for reasons best known to him. The political space he ceded to Dhinakaran gave him an extra rival to contend with, apart from the AIADMK.

even nota beats bjp
NOTA, or None of the Above, got more votes than BJP candidate Karu   Nagarjan in the RK Nagar by-election
As many as 2,373 voters from the constituency opted for NOTA, leaving Nagarajan with a paltry 1,417 votes

Stay up to date on all the latest Tamil Nadu news with The New Indian Express App. Download now
(Get the news that matters from New Indian Express on WhatsApp. Click this link and hit 'Click to Subscribe'. Follow the instructions after that.)
TAGS
DMK RK Nagar