Looks like Tamil Nadu’s official flower Glory Lily (Senganthal) is past its glory days as far as farmers in Nagapattinam district is concerned. Vedaranyam, which used to be the hub for Senganthal in c

NAGAPATTINAM: Looks like Tamil Nadu’s official flower Glory Lily (Senganthal) is past its glory days as far as farmers in Nagapattinam district is concerned. Vedaranyam, which used to be the hub for Senganthal in central Tamil Nadu, has seen a sharp dip in cultivation as farmers are shifting to conventional crop. As a result, price of Senganthal seeds, sought after for their medicinal value, has skyrocketed in the export market. 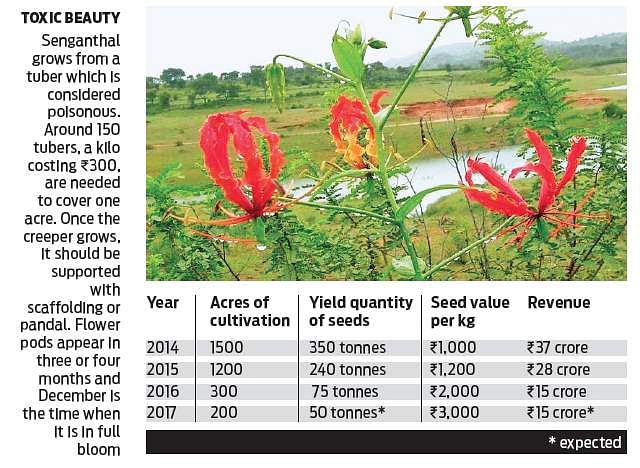 The reasons attributed are health hazards and lack of financial support from the government. Senganthal is a poisonous plant, and can result in death if ingested. The tuber contains high levels of colchicine, a toxic alkaloid, and triggers nausea, numbness, abdominal pain besides other illness if not handled with care. Prolonged exposure to the tuber can cause peeling of the skin.

M Muthappan, a farmer in Sembodai told Express, “I cultivated Senganthal for nearly ten years.  For an acre, I spent around Rs 1 lakh and get Rs 5 lakh in return. The tuber is highly toxic, and mere handling can cause harm. Initially, I did not feel the harmful effects, but after a few years I fell ill whenever I touched the tuber. Also, the government stopped subsidy for the plant in 2014 and I stopped cultivating Senganthal.”

Muthappan’s case is just an example. Like him there are several farmers in Vedaranyam who have given up Senganthal cultivation. Though agents are ready to give Rs 3,000 for per kg of seeds, farmers are not keen to grow this crop. V Jayaraman, an agent, said, “Senganthal seeds are most sought after in France, Italy, Malaysia, Canada. Vedaranyam  is a major procurement centre for us along with Karur, Salem, and Tiruppur. Five years ago, I procured around 350 tonnes of seeds from Vedaranyam, paying Rs 1,000 per kg. In 2015, it came down to 240 tonnes at  Rs 1,200 per kg. While last year drought forced farmers not to cultivate the plant, this year also there is not much cultivation.”

Senganthal seeds are a major ingredient in medicines for joint pain, cancer, and skin diseases, and manufactures expect at least 1000 tonnes of seeds from India every year. “We are ready to offer Rs 3000 per kg, but there are not enough seeds,” Jayaraman rues.

Speaking to Express, Siva Ramakrishnan, Horticulture Officer, Vedaranyam Block said, “ Currently, Senganthal cultivation is on in 200 acres. This is a nine-month crop and cultivation should have started in July so that harvesting can be done in May. But farmers seem to be losing patience with the crop. We used to give Rs 68,750 per acre as subsidy, but the decrease in farmer count has made the government stop it.”

Kannan, Assistant Director, Horticulture, Department, Nagapattinam district, put things in the right perspective. “Subsidy is given by the Union government. According to norms, a farmer can receive subsidy for three years continuously. Since almost 100% of farmers in vedaranyam have availed of the subsidy in 2014, we have stopped any further subsidy. With the request of farmers we are talking with the Union government to resume subsidy. Also, we guide farmers in correct methods of cultivation.”