2017 was by no means an easy year for farmers of the State. The effects of last year’s drought lingered on in the first half of the year, crop claims were delayed and when monsoon finally arrived, it

2017 was by no means an easy year for farmers of the State. The effects of last year’s drought lingered on in the first half of the year, crop claims were delayed and when monsoon finally arrived, it brought cheer only to few districts. But there were also reasons to look forward to 2018

NAGAPATTINAM: The skies will either destroy us with excess rain or no rain at all,’ goes a popular saying in Tamil in rural parts of the state. And it stands true when the plight of farmers in the state is taken into account.

Battered by drought in 2016, the rains in 2017 have brought farmers of Tamil Nadu some cheer ahead of Pongal. But this too with loss of crops due to inundation.

“As of now, 2017 is looking good for us despite the heavy downpour in the first and last week of November. Although flood waters have drained out, the scars of damage is writ large upon the faces of farmers,” says Arupathy Kalyanam, general secretary of the Cauvery Delta Districts Farmers Association.

Many of the farmers suffered 20 to 35 percent of yield loss for every acre, making them eligible to seek crop loss survey as per the Pradhan Mantri Fasal Bima Yojana (PMFBY), says Kalyanam.

According to PMFBY, crop dues should be released after 60 days of the completion of crop-cutting experiments. But here, 10 months have passed and still the officials are making excuses, he alleges.

Interestingly, the rains have been tied to the fortunes of farmers and at times their entire survival depends on it. According to figures available with Express, around 30 farmers in Nagapattinam district committed suicide during 2016-17, when the monsoon failed.

Since every agriculture season starts with the Kuruvai cultivation in June, the heavy drought made the district administration restrain the Kuruvai special package last year, says a official of Nagapattinam Agriculture Department.

Interestingly, with good rains and farmers using proper water management techniques, the Kuruvai package this year was announced at an estimated cost of `16 crore with a target to cover 38,000 acres,” the official says.

Apart from Kuruvai, pulses were also cultivated in some 25,000 acres in the district with the help of drip irrigation technique. But challenges remain. During the Kuruvai season, farmers were finding it difficult to procure the seeds. This has paved the way for middlemen to sell fake ones.
Not only that, in Nagapattinam, farmers are yet to get their crop claim dues to begin farming for this season.

“Of the 1.42 lakh hectares of agriculture land in Nagapattinam district, 95 per cent had 100 per cent yield loss in the 2016-17 season,” claims S Ramadoss, district secretary of Tamilaga Cauvery Vivasaigal Sangam

As the claims have been delayed for more than 10 months, many of the farmers have no other alternative but to seek the help of loan sharks, says Ramadoss.
Interestingly, the crop insurance has pitfalls. Kamalram, block secretary of Thalainayar for Tamil Nadu

All Farmers Organising Committee, states that around 3000 acres of samba-crop land is still inundated in Thalainayar as the region alone received 150 cm of rainfall.
Blaming the district administration for failing to bail out the farmers, he says that officials have asked the farmers to wait for the crop loss insurance. “The official records will consider this as prevented sowing, and we won’t be able to get much as far as insurance is concerned,” he laments.

Meanwhile, some farmers say there is a lack of co-ordination between the Agriculture Department, Statistics Department and the New India Assurance Company. Cauvery Dhanapalan, General Secretary of Cauvery Delta Farmers Protection Association tells Express it could be one of the reasons behind delay in insurance money.

“According to PMFBY, crop dues should be released after 60 days of the completion of crop-cutting experiments. But here, 10 months have passed and still, the officials haven’t given us our dues. The Government should learn lessons from these obstacles and sort this out in the upcoming year,” he says.
Farmers say more than the crop damage, it was the sight of withered crops that made farmers take the extreme step of taking their own lives.

Even though 2017 came with its share of hardships, such as untimely rainfall, unpredictable monsoon and delay in crop claims, farmers are looking forward to 2018. They are hopeful of a good harvest for Pongal.

Challenges aplenty
● During the Kuruvai season, farmers were finding it difficult to procure seeds
● They feel there is lack of co-ordination between the Agriculture Department, Statistics Department and the New India Assurance Company, delaying payment of crop dues
● Low-lying coastal areas like Thalainayar are usually more affected than the rest
● Natural farming techniques may cut reliance on expensive fertilizers and seeds
● Rise of shrimp farming is another worry. On some areas, it increases salinity of groundwater in villages. Shrimp farms at estuaries stop flood water from draining out into the sea 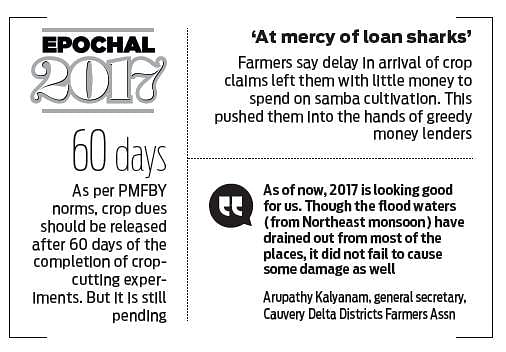