This year’s Northeast monsoon (NEM) has been erratic. Though Tamil Nadu has experienced a nine per cent deficit, which theoretically is seen as normal, the wide gap in spatial distribution of rainfall

CHENNAI: This year’s Northeast monsoon (NEM) has been erratic. Though Tamil Nadu has experienced a nine per cent deficit, which theoretically is seen as normal, the wide gap in spatial distribution of rainfall makes it ‘subnormal’.

The monsoon has totally failed in eight districts with deficits ranging from 30 per cent to 49 per cent, while 14 others have received below-normal rain. Chennai has been lucky, having received 19 per cent excess rain. The season ends on Sunday.

When compared to last year’s ‘disastrous’ performance, this season has been far better. As per IMD records, NEM 2016 ended with 62 per cent rainfall deficiency over Tamil Nadu, and it was the second-worst after 1876, when the sub-division faced 63 per cent deficit rain. Monsoon had failed in all the districts of the State.

S Balachandran, Director, Area Cyclone Warning Centre, told Express that as per India Meteorological Department (IMD) classification of monsoon performance over a meteorological sub-division, if the amount of rainfall received over a region is between (-)19 per cent and (+)19 per cent, the monsoon performance is termed as normal. The State has received 399 mm rainfall as against the normal rainfall of 439.5 mm.

Tamil Nadu is highly dependent on NEM to meet its drinking and irrigation needs. This year, the monsoon’s arrival got delayed by almost two weeks. Though IMD had announced that monsoon would arrive on October 27, it actually become fully active from the first week of November. IMD officials said during the last 115 years (1901-2015), onset of NEM has occurred on or after 25th October on 28 occasions with 8 occurrences going into November. The most delayed onset has been in 1915, on November 11.

Balachandran said usually, NEM withdrawal will be in second week of January, but for rainfall computations, the season will end on December 31. “The withdrawal depends on multiple factors such as easterlies, moisture, system development etc,” he said, adding that though models show a trough of low over South Andaman sea in Southeast Bay of Bengal, it is unlikely to intensify into a low pressure area around January 1, 2018. So, there isn’t any major rainfall activity expected.

Y E A Raj, former deputy director-general of meteorology, said the monsoon has failed in western and some southern districts. Pudukottai is reeling under 49 per cent deficit, Ramanathapuram 47 per cent, Coimbatore 44 per cent, Tiruchy 43 per cent and 38 per cent for both Shivaganga and Erode. “For a water-stressed State like Tamil Nadu, an overall deficit of 10 per cent also matters and spatial distribution has also been poor. Places like Kerala receive 250 cm of rainfall annually, and a 10 per cent deficit doesn’t matter much,  but Tamil Nadu receives only 43 cm during NEM.”

Weather blogger Pradeep John said the reason for such a huge deficit in interior districts that none of the four weather systems that formed in the bay this season penetrated into the State.
The low pressure area that formed in first week of November brought good rainfall to northern districts, including Chennai. The second low pressure in mid-November moved away towards Odisha and then came the cyclonic storm Ockhi that smashed southern districts like Kanyakumari. The fourth depression totally missed Tamil Nadu and went towards Andhra Pradesh-Odisha coast.

The Southwest monsoon (SWM), which brings copious rainfall to the rest of the country but not Tamil Nadu since it is a rain-shadow region, was surprisingly very active over the State this year. Between June and September, the State received 414.2 mm of rainfall as against a normal  of 321.4 mm, which is 29 per cent in excess.

In Coimbatore, where NEM failed, SWM brought a whopping 169 per cent excess rainfall. Similarly, Theni received 131 per cent excess, Tiruppur 100 per cent, Perambalur 90 per cent and Sivaganga 75 per cent.

In fact, the good rainfall performance during August and September over the South Peninsular region, comprising of the five states of Andhra Pradesh, Telangana, Karnataka, Kerala and Tamil Nadu and two union territories of Puducherry and Lakshadweep was 717.6 mm, which is 100% of its long period average (LPA) of 716.1 mm. However, the SWM seasonal rainfall over the country as a whole was 95% of its LPA. 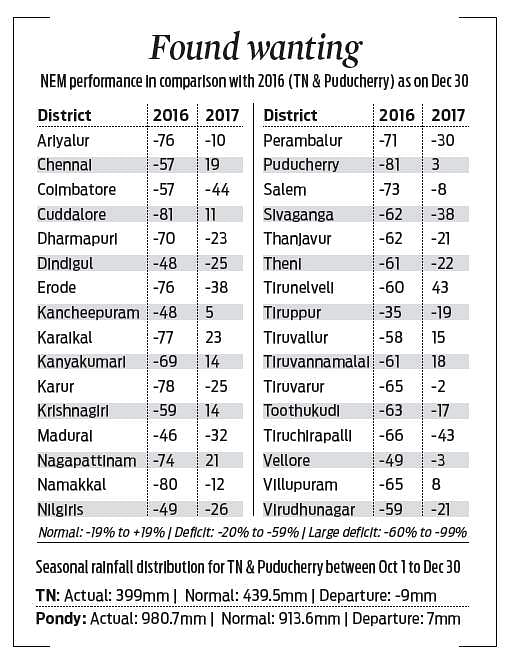 Stay up to date on all the latest Tamil Nadu news with The New Indian Express App. Download now
(Get the news that matters from New Indian Express on WhatsApp. Click this link and hit 'Click to Subscribe'. Follow the instructions after that.)
TAGS
Northeast monsoon