Here is a look at the major flare-ups between Narayanasamy and Bedi since the two were pitted against one another.

PUDUCHERRY: It is not as high profile as the battle between Delhi Chief Minister Arvind Kejriwal and former Lieutenant Governor Najeeb Jung, but the war between Puducherry Chief Minister V Narayanasamy and LG Kiran Bedi is no less intense.

On one side is a street-smart politician who perfected his craft in the corridors of power in ultra-competitive Delhi, even while he nurtured his space in the tiny Union Territory to emerge as the Chief Minister. On the other side is a compulsive activist, who remained so when she donned the khaki as a senior police official, and the khadi when she turned to politics after retirement.

It was Bedi’s activism that put her on a collision course with the territorial government. She convened meetings with officials from various departments and gave them directions bypassing the elected government, conducted inspection trips to review work and upbraided officials and criticised local representatives, organised Janata durbar in her official residence for people to raise issues directly. In just months, she was a power centre running parallel to Narayanasamy's government – many a time perched above it.

Here is a look at the major flare-ups between Narayanasamy and Bedi since the two were pitted against one another... 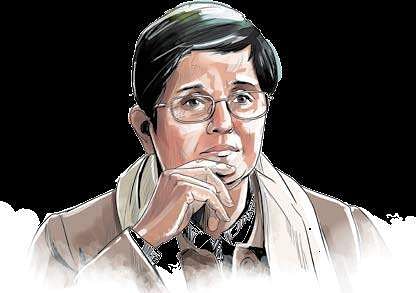 Soon after taking charge, Bedi formed WhatsApp groups with senior officials as members. She passed instructions through this, and sought reports as well. This did have many advantages, but had one key flaw: without being added as members, the ministers, the ones accountable for the performance of their departments, were left in the dark about the agenda and outcome of these meetings. Soon, Narayanasamy directed officials not to use modes like WhatsApp groups to communicate official matters. This immediately led to an exodus from the groups. Though Bedi cancelled the order, officials were not keen on returning.

Tighter hold on the purse strings

A Lieutenant Governor has a lot of power when it comes to bureaucratic matters, which Bedi realised in her early days as L-G. She has been using that ever since, alleged ministers and MLAs, who hold her responsible for the delay in taking up many welfare schemes including the ones promised ahead of polls. These include not allowing the distribution of old age pension at the doorsteps, not clearing the request to float tender to procure rice for free-rice programme, granting only one-fourth of the local area development funds, and insisting that the dredging work at Puducherry harbour be done only by the State-run firm which allegedly led to delays. However, according to Bedi, her intention is only to ensure that the cash-strapped UT administration was prudent in spending the available funds for matters that are of priority.

A Swachch Bharat event became a point of confrontation between the L-G and government, after the local MLA from opposition AIADMK complained that he was not invited despite it being mandatory. The MLA entered into an argument with the municipal commissioner, and then raised a breach of privilege complaint with the Speaker, while the official filed a petition with the DGP alleging threat to his life from the MLA. The Speaker referred the matter to Privilege Committee and also directed that the official be put on compulsory wait. The next day, her secretary sent a note to the chief secretary (as directed by Bedi) informing that the transfer order was invalid.

Among all her moves, this was the one that hit local politicians the most. Bedi’s announcement that MLAs will be ranked on the basis of public feedback riled the MLAs no end. After mooting this in a WhatsApp group first, Bedi went public with the decision. The idea was that all from a particular constituency could vote for their MLAs based on performance, which, she calculated, could prod them into undertaking more cleanliness initiatives under Swachch Bharat. This did not go down well with the MLAs; many pointed out how Bedi, despite being projected as the chief ministerial candidate of the BJP, could not even win the election in her home turf of Delhi when AAP recorded a massive victory against the Modi wave.

Following complaints from students and parents, Bedi, in her characteristic style, barged into the office of the Centralised Admission Committee (CENTAC), where she found fault with the administration including ministers for not following proper admission procedure and raised charges of corruption.

Narayanasamy responded by saying that everything was being done as per guidelines laid down by the Medical Council of India, and claimed even the Centre and Health Ministry in particular had appreciated the process. The Chief Minister even went to the extent of challenging her to prove the allegations. Both have taken to Twitter to justify their positions in this latest round of sparring.