Fight for pension rages on in Tamil Nadu

CHENNAI: Government employees began indefinite strike from Monday  demanding implementation of the seventh pay commission and withdrawalof the new pension scheme. While this resulted in empty chairs in a few government offices, another section of unions are not  participating in the strike and said that they would wait till October 15 for the government to act on their demands.

The government employees staged protests across the State under the banner of Joint Action Committee of Tamil Nadu Teachers’ Organisations - Government Employees’ Organisations (JACTTO-GEO). “We will continue the strike until the government gives in writing that it is accepting our demands,” said A Mayavan from Tamil Nadu High and Higher Secondary Graduate Teachers Association who now heads the faction that has gone on strike.

JACTTO-GEO split into two factions earlier this month with a portion of employees from the secretariat, various teachers employees associations and social workers withdrawing from the State-level strike. This faction headed by P Ilangovan, the State convenor of the (formerly united) JACTTO-GEO, declared that they will wait until October 15 for the government to take action. The various associations  under Ilangovan are meeting on Tuesday to discuss the plan.

The Ilangovan faction had met CM Palaniswami who had promised to resolve the issue. “We will wait until September 30 for the government to implement the seventh pay commission and until November 30 to roll back the new pension scheme. The Chief Minister has promised to take action by these deadlines,” said Ilangovan adding that the government has agreed to pay 20 per cent interim compensation if they fail to meet the deadline.

Why are they protesting

There will no longer be any PF account. The take home pay of the employee will get reduced, because of the additional amount deducted (10% on DA)
Since the funds are invested in bonds and securities, their prices and their earning potential have high degree of volatility
Fixed income securities are also not free from market risks
Though it is claimed that professional fund managers will take decisions with regard to investment of the funds, ordinary subscribers do not have sufficient time and requisite knowledge to understand such investment decisions and question the fund managers

The extent of autonomy enjoyed by PFRDA is yet to be tested. In case of default or malpractices, whether PFRDA has necessary punitive powers and if so, to what extent they are effective are yet to be known
It remains to be seen how the actual costs move in future. With inflation, the costs may go up further. When more pension fund managers enter the fray and the subscriber base expands vastly, the charges may also come down in future
Whatever be the charges, they result in diminution of the pension wealth
NPS acts a dampener to those who want to take VRS. Since the NPS is meant for retirement and financial security, it does not permit flexible withdrawals as are possible in the case of mutual funds
One does not have the freedom to withdraw their own contribution, i.e. up to 50% of the pension wealth. Thus, much of the lifetime savings of the employee gets locked up in annuity, much against their wish. It is a major setback to the senior citizens

The Contributory Pension Scheme or the NPS is applicable to those who joined government service in regular time-scale on or after April 1, 2003 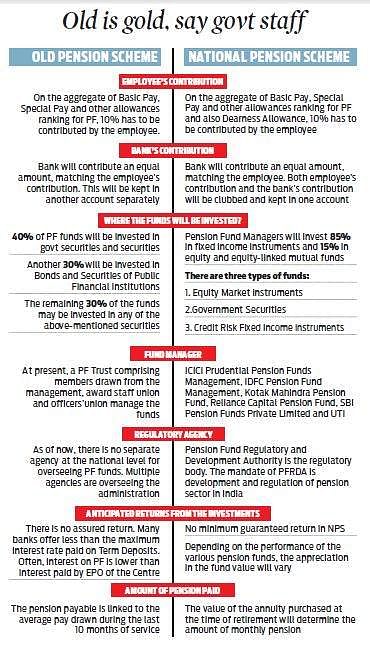 Now we are on Telegram too. Follow us for updates
TAGS
pension Tamil Nadu