Just five students from government schools made it to MBBS this year, the first year medical admissions were made based on National Eligibility-cum-Entrance Test (NEET) score. 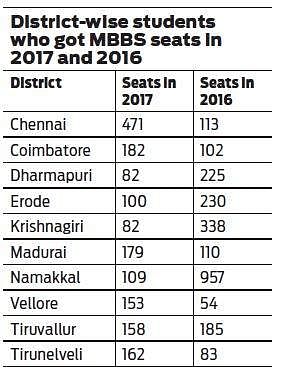 Has the NEET-based system severely impacted the chances of students from economically poor and rural families? People in the know say these statistics are not conclusive proof. They point out that the government-aided schools also cater to students from poor and rural background, but were categorised as “private schools” in the data. “I studied in a government-aided school at Cuddalore. My annual fee was `125 for class XI and `200 for Class XII,” said Satva, who studied in a government medical college.
“Not only this, the Adi-Dravidar Welfare Board also selects 10 toppers from Class X in government schools from all the districts and fund them to study in private schools. These students are still considered as private school students,” said PB Prince Gajendra Babu, an educationist.

So, instead the data could be used to interpret the performance of the schools solely run by the State.
Another fact that cannot be missed is that the admission data shows that NEET-based admissions had favoured Chennai students. As many as 471 students from Chennai secured MBBS seats this year compared to 113 last year. On the other hand, it has also favoured students from some of the State’s most backward districts. For instance, last year only four students from Ariyalur district got MBBS admissions. This year it is has increased to 21. The biggest blow was for Namakkal district which over the years had become “toppers factory” in the State board results. Last year, 957 students from schools in thxis district secured MBBS seats. This year it was just 109.

Now we are on Telegram too. Follow us for updates
TAGS
NEET Tamil Nadu