Swami Ramananda of Akhila Bharatiya Thuraviyar Sangam hoists flag in the presence of Kanchi Sankaracharyas; lakhs of devotees expected to throng the banks of Cauvery in the next fortnight

NAGAPATTINAM: After Maasi Mahamaham, the Cauvery was flooded once again as thousands of devotees converged on Thulakattam in Mayiladuthurai for the 2-week Cauvery Pushkaram which began on Tuesday. The day marks the transition of Jupiter (Guru) from Kanya to Thula Rasi. Legend has it that all sins get cleansed with a dip in the Cauvery during Maha Pushkaram. 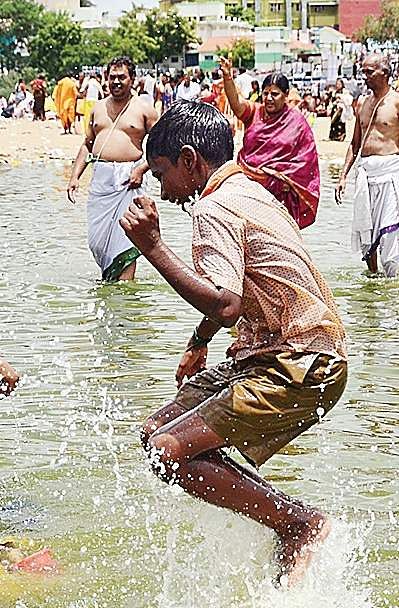 Devotees started arriving in Mayiladuthurai since Monday in order to be present for the flag-hoisting ceremony which was scheduled at 8 am on Tuesday. There was a long queue at the Town Bus Stand and people walked about 1 km from the bus stand to reach the Thulakkattam. Swami Ramananda, secretary, Akhila Bharatiya Thuraviyar Sangam, hoisted the flag in the presence of Kanchi Sankaracharyas Sri Jayendra Saraswati and Sri Vijayendra Saraswati. The Kanchi pontiffs also took bath in the river.
Among those who took a dip included BJP natiomal secretary H Raja, and Princess Irene of Greece and Denmark.Two additional bus stands have been set up on a temporary basis to manage the rush.

Thamirabarani Pushkaram next year
At the Thuravigal Manaadu (monks’ conference) held on Tuesday evening,Sri Marudhachala Adigalar, Ilayapattam, Perur Adheenam, Coimbatore, one of the organisers, said next year’s pushkaram would be conducted on the river Thamirabharani. This is because Guru (Jupiter) is to transit from Thula Rasi to Vrichika in the coming year

Now we are on Telegram too. Follow us for updates
TAGS
Pushkaram