The commission, headed by retired judge of Madras High Court, A Arumughaswamy, has also been asked to submit the report within three months.

CHENNAI: In a strategic move that seemingly seeks to corner VK Salikala and her family, the State government directed a one-man commission probing the death of late chief minister J Jayalalithaa to also inquire into the circumstances leading to her hospitalisation during its probe.

The commission, headed by retired judge of Madras High Court, A Arumughaswamy, has also been asked to submit the report within three months.

“The commission should inquire into the circumstances and situation leading to the hospitalisation of Jayalalithaa on September 22 and subsequent treatment provided till her unfortunate death on December 5, 2016,” the terms of reference issued to the commission said.

The government order on the terms of reference for the commission was issued on September 25 and was published in the extraordinary issue of the Tamil Nadu government gazette on the same day, but was made public only on Wednesday — three days later.

The order said the government has decided that there should be an independent inquiry into the unfortunate death of the late Chief Minister and appointed retired judge Arumughaswamy as the head of the commission.

It took several weeks for Jaya’s death to become a controversy. It was after Deputy Chief Minister O Panneerselvam rebelled against her closest aide and self-appointed heir VK Sasikala and a group of supporters joined him and split into a faction that allegations began being traded. Until then everyone sang the same refrain that ‘Amma’ was fine and everything was being taken care of well. 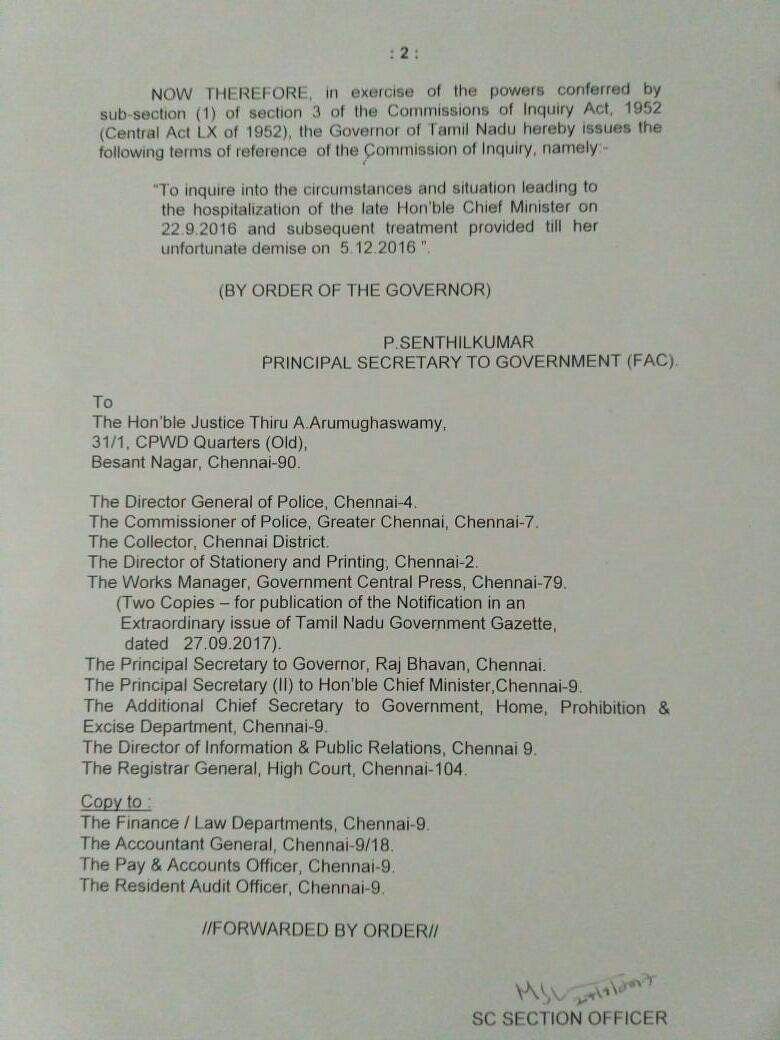 Though demanded with vigour and announced with enthusiasm, the probe into the “treatment provided” to Jaya while she was at Apollo Hospital may not fetch Sasikala’s rivals any prize worth the effort. That would require finding evidence of oversight if not collusion of a large number of reputed doctors including those from AIIMS, Delhi, and abroad who had assisted in her treatment.

However, as Jaya was famously accessible only to Sasikala and a chosen few among her family, an inquiry into the “circumstances that led to her hospitalisation” is limited and focused only on Sasikala.