The book was released by Chief Minister Edappadi K Palaniswami on Tuesday at the Secretariat.

CHENNAI: n a unique effort, International Institute of Tamil Studies (IITS), a wing of Tamil Development department of the State government, has brought out a new edition of Thirukkural couplets written in the script - Brahmi Thamizhi - which was in vogue during the times of the saint-poet Thiruvalluvar.

The book was released by Chief Minister Edappadi K Palaniswami on Tuesday at the Secretariat.
“Those who visited the Thirukkural exhibition at the IITS which displays all aspects of this ancient literature, expressed their wish to see Thirukkural as written by Thiruvalluvar 2,000 years ago.  The researchers too wished to see the script prevalent during the times of Thiruvalluvar.  So, IITS has taken sincere efforts to bring out this unique volume,” G Vijayaraghavan, Director, Tamil Development department and director in-charge of IITS, told Express. 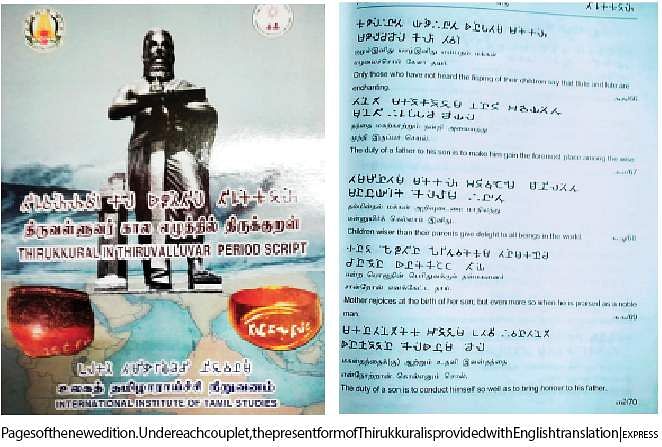 He said that for the benefit of the common people, the complete set of Brahmi Thamizhi letters with their present Tamil equivalents have been given. “This will benefit both researchers as well the public. If anyone finds an inscription in their land with these script, they can decipher them to their probable meaning and save them.  In that way, this book may serve as a primer of Brahmi Thamizhi too,” he added.
He said, “We have translated Thirukkural in numerous Indian and foreign languages. But, we never translated it into our ancient Tamil script. Now, the IITS has fulfilled that.”

He also pointed out that though already Thirukkural was published in the ancient script, they were not completely written in Brahmi Thamizhi script. Under the guidance of archaeologists K Kulandaivelan and C Vasanthi, experts have written all couplets in Brahmi Thamizhi script. Under each couplet, the present form of Thirukkural is given with English translation for understanding of those who buy this book.”

The archaeologists-cum-editors of this volume have given an elaborate introduction on the various scripts prevalent in different parts of the country and how the Tamil script had  undergone changes over a long period.  In this connections, photographs about inscriptions found in different parts of TN during First, Second and Third Century BCE, First Century AD, First Century BC are given.  Copies of this book are available at IITS, Taramani.