The expert team was also asked to check the stability of Veerachandarayar mandapam and ‘Ayiram Kaal Mandapam’.

MADURAI: After inspecting the Meenakshi temple in Madurai, where a major fire damaged the ancient sculptures on the pillars near ‘Ayiram Kaal Mandapam’ (1000 pillar hall), Minister for Hindu Religious and Charitable Endowments Sevur S Ramachandran said that the government had sought the help from experts from IIT and they would submit a report after inspecting the spot. “Based on the report, renovation works will be carried out without disturbing the ancient structure,” he said.

Revenue Minister R B Udhaya Kumar and Cooperatives Minister Sellur K Raju also visited the temple, where nearly 19 pillars and several ancient sculptures and cravings were damaged in the fire that broke out from the shops inside the temple on Friday night. Nearly 20 shops turned into ashes and 16 shops were partially damaged in the incident. 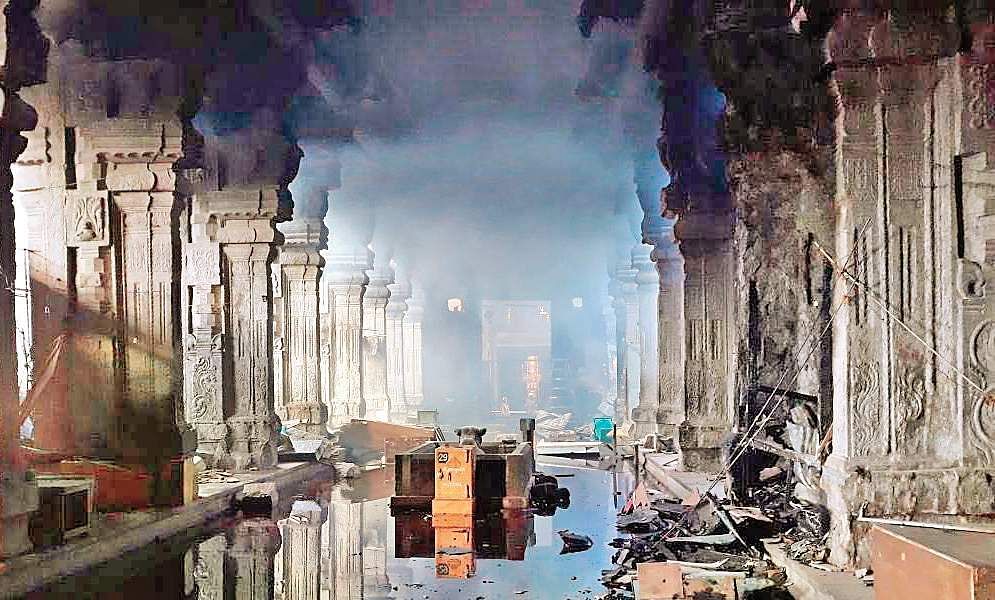 The fire also spread to ‘Ayiram Kaal Mandapam’ (1000 pillar hall) which was built in 1569 by by Ariyanatha Mudaliyar.

Further, the ancient carved paintings on the ceiling of the inner roof tops of the Veerachandarayar mandapam was severely damaged. Several carvings and mythical structures on the walls and the pillars in the outer complex walls were also damaged.

Meanwhile, Collector Veera Raghava Rao said that appropriate action would be taken against the authorities, if any violations were found in allotting licence to the shops functioning on the temple premises.

BJP district president Sasiraman condemned that the lethargic attitude of the temple authorities was the reason for the accident and “the government must ensure that no such incidents happen in future.” He also said that fire extinguishers should be kept on standby in all temples.

According to HR&CE, there are 115 shops were licensed to operate on the premises of the temple and the shops were given instructions that no electronic goods or batteries should be sold. These shops were allowed to sell only pooja materials.

More from Tamil Nadu.
Now we are on Telegram too. Follow us for updates
TAGS
Madurai fire