CHENNAI: Bus connectivity from various parts of the western Tamil Nadu with Chennai and Bengaluru is set to improve as the State Express Transport Corporation (SETC) launched five AC sleeper bus services on Monday. According to official sources, on Monday luxurious AC sleeper buses were introduced on the routes of Chennai-Salem, Chennai-Erode, Chennai-Madurai, Chennai-Gopichettipalayam, Chennai-Bodinayakkanur and Coimbatore-Bengaluru, replacing the existing SETC buses.

Ticket fare to Madurai from Chennai costs Rs 950 per person (excluding online booking charges and GST), while a passenger needs to spend around Rs 700 for going to Salem. The ticket fare between Chennai and Gopichettipalayam will be priced around Rs 900. While officials said the fares were priced about 10 to 15 per cent lesser than those in private omnibuses, the AC sleeper bus ticket prices will go down during weekdays as dual tariff system has been introduced. 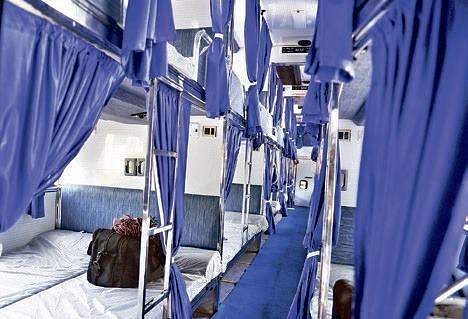 This means the per km price of AC sleeper bus is fixed at 200 paise between Thursday and Sunday, while the price will come down to 180 paise for the same distance between Monday and Wednesday.“We are not increasing the fare during weekdays, rather we are reducing it. However, the ticket prices of other category buses will remain unchanged,” said a senior official of the SETC.On Monday, Chief Minister Edappadi K Palaniswami flagged off the first batch of 515 government buses from the Secretariat on Monday, which were built as per AIS 052, a standard code for building buses prescribed by the ARAI (Automotive Research Association of India). The buses were built at the cost of Rs 134.53 crore.

The new mofussil and SETC buses are built with pneumatic doors, collision warning sensor, raised platforms with emergency exits at front and rear. The degree of inclination of seats has increased to 115 so as to give better comfort.In mofussil buses, number of seats has been reduced from 57 to 48 to make way for emergency exits on the rear side. The buses have also been fitted with surveillance cameras and enabled with GPS tracker.

Chennai: The Assembly on Tuesday witnessed heated arguments over the loss-making state-run transport corporations as both AIADMK and DMK blamed each other for pushing the corporations into mounting debt burden. DMK MLA Anbil Mahesh Poyyamozhi’s observations on bus quality, body-building code, dipping commuter base and hike in fares triggered the debate. He charged that due to hefty fare hike, the number of passengers had dropped to 1.80 crore from 2 crore and now it had further plummeted to 1.50 crore. He also stated that his party’s regime had not raised bus fares even once when it was in power in 2006-11.

Countering him, Minister for Transport M R Vijayabhaskar recalled that the DMK regime had effected a hefty hike in the bus fare during its stint in 1996-2001. Justifying the fare hike effected by the AIADMK government, he said it was under compelling financial situation as the costs of diesel, spare parts, toll fee and employee salary rose manifold. Noting that diesel rate has risen to Rs 69.96 now when compared to Rs 43.10 in 2011, he said the employees’ average salary too rose from Rs 21,000 to Rs 46,242 per head.

The toll fee too mounted to Rs 150.56 crore from Rs 37.76 crore. Leader of Opposition M K Stalin remarked that a steep hike was made in a single stroke and asked the minister to grasp what the member said and respond accordingly. Referring to the issue of government bailing out the loss-making transport corporations, Vijayabhaskar said the government had given a total of Rs 3,685 crore during the DMK regime in 2006-11 but Rs 12,482 crore was provided by the government in the last seven years.

Now we are on Telegram too. Follow us for updates
TAGS
Bus connectivity SETC sleeper buses Coimbatore-Bengaluru