Coimbatore, Madurai, Tiruchy and Salem are the cities which will fuel the next phase of growth as the state government has lined up several projects for the future of these cities.

CHENNAI: Coimbatore, Madurai, Tiruchy and Salem are the cities which will fuel the next phase of growth as the state government has lined up several projects for the future of these cities, according to a report by Jones Lang LaSalle, a global real estate firm.

The report ‘Advantage Tamil Nadu: Conquering beyond Boundaries’, released by Deputy Chief Minister O Paneerselvam during STATECON, organised by the Confederation of Real Estate Developers Association of India (CREDAI), the four cities stood out in terms of per capita income and score based on 12 key growth-related elements, which were grouped in three main sun-indices, including socio-economic momentum, enhanced connectivity infrastructure and high-value incubators.

The four emerging hotspots have shown the potential to emerge as business destinations backed by business-friendly policies and connectivity with hubs such as Chennai and Bengaluru resulting in growth of several industrial clusters.The report also stated that two industrial parks in Moperiplayam and Kallapalayam are expected to become operational before mid-2019. 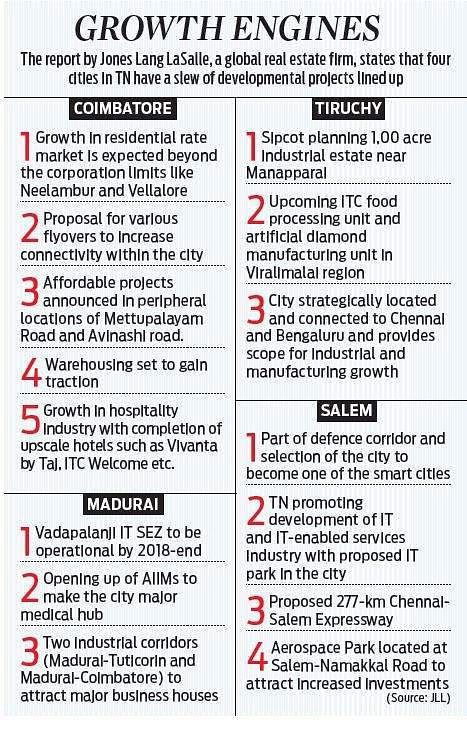 More from Tamil Nadu.
Now we are on Telegram too. Follow us for updates
TAGS
STATECON