Pain of Labouring under Do-it-yourself delusion

28 year-old K Krithiga was determined to have a natural delivery. While her family waited in hope till the last minute for Krithiga to change her mind, her death after delivering is shocking.

COIMBATORE: 28-year-old K Krithiga was determined to have a natural delivery. While her family waited in hope till the last minute for Krithiga to change her mind, her death after delivering a healthy baby girl has left her loved ones shattered, the 28-year-old’s father Rajendaran said. A teacher, Krithiga wanted her baby to be delivered naturally without medical assistance. She was assisted by her husband J Karthikeyan and friends Praveen and wife Lavanya, who relied on YouTube videos to help her. This insistence proved costly.

The death stands as an anomaly in Tamil Nadu, where the rate of institutional delivery is almost 100 per cent. What comes as another shock is that the people assembled to help Krithiga with her delivery had no knowledge, let alone experience, about it. So, when matters took an awry turn, the attendants were streaming YouTube for assistance even as Krithiga bled to death. 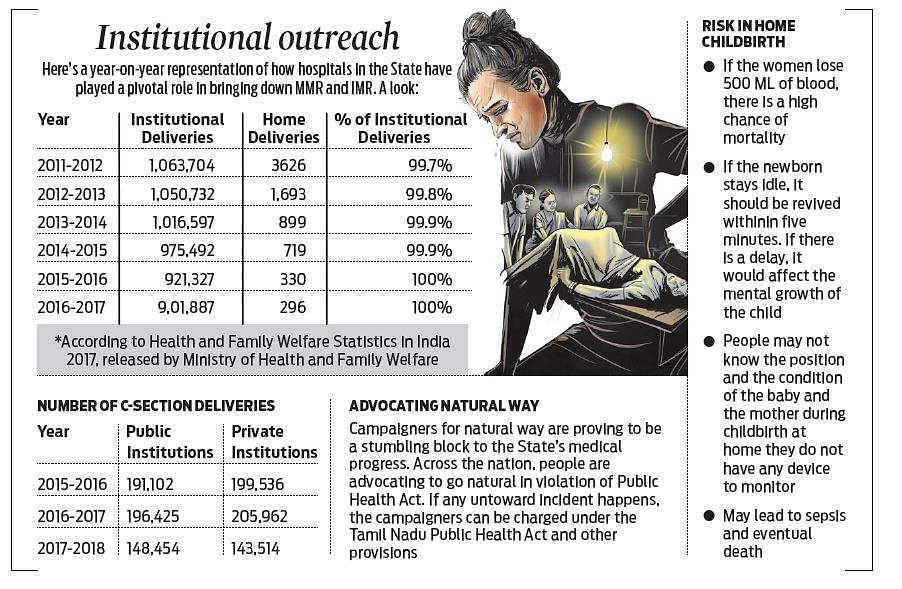 Krithiga’s is not an isolated case. There are numerous incidents of mothers opting for natural delivery in Coimbatore. However, successful and incident-free deliveries mean that health officials come to know about the case only later. In recent times, people have been opting for natural deliveries owing to sustained campaigning by certain activists, who urge people to return to the old modes of living. While people fall for the tagline of ‘our ancestors were not fools’, little do they realise the pitfalls.

“In earlier times, childbirth at homes were norm as there was no access to healthcare. It was the time when Maternal Mortality Rate (MMR) and Infant Mortality Rate (IMR) were high. It is with the aim to curbing both MMR and IMR that Tamil Nadu Public Health Act stresses institutional delivery. Over the years, the State has brought down home childbirth, with institutional deliveries being pegged at 99.4 per cent,” said Darez Ahamed, commissioner of Reproductive and Child Health.

Social media campaigns and do-it-yourself models are a threat to the public health model. “There have been instances when patients asked for specific medicine after searching on the internet. They search on Google and want medicines favoured on certain sites. How could information on the Google be always correct,” asks AK Ravikumar, Indian Medical Association, National Coordinator at National Head Quarters. Enumerating the risks involved in home childbirth, he said that a delay in reviving the baby could affect its mental health. “Even after a successful delivery, a few babies do not cry. Such babies have to be revived within five minutes,” he said.

A belief that shattered the life

Karthikeyan’s paternal uncle Thagavel died around 10 months ago. Thagavel was reportedly following naturopathy. As Karthikeyan and Krithiga were also following naturopathy, according to police, they believed Thagavel would be reborn if they chose the natural way. Krithiga’s first child was hospital-born. The Nallur police in Tirupur district slapped Krithiga’s husband Karthikeyan, his friend Praveen and Lavanya with charges of causing death due to negligence and arrested Karthikeyan on Friday.

Now we are on Telegram too. Follow us for updates
TAGS
K Krithiga delivery pregnancy childbirth