The sad state of affairs in south western suburban network is attributed to poor planning during gauge conversion, delay in manufacturing rolling stock and lack of support by the State government.

CHENNAI: On November 1 2004, an Electrical Multiple Unit (EMU) train made its maiden run on broad gauge line in south western suburban section between Tambaram and Chennai Egmore. It has been nearly 14 years since then.

The sad state of affairs in south western suburban network is attributed primarily to poor planning during gauge conversion, delay in manufacturing rolling stock (EMU coaches) and lack of support by the State government, according to experts. 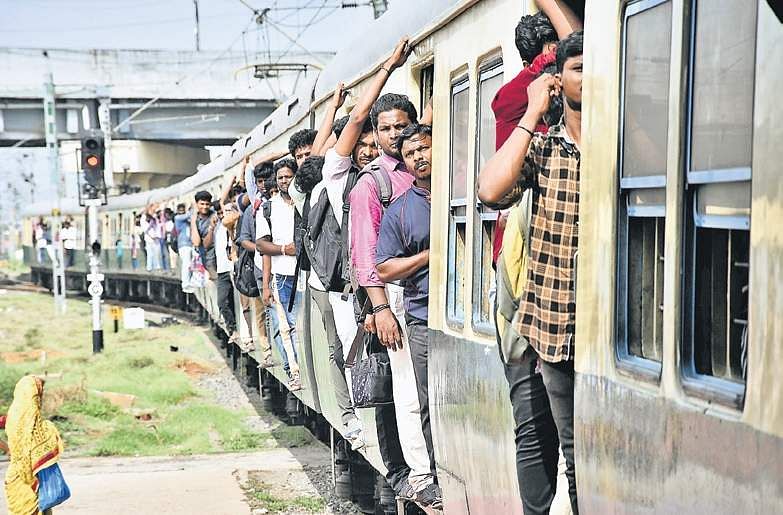 “The Chennai-Tambaram metre gauge layout was developed before 1940. The future expansion of train network was not taken into an account during gauge conversion. Tracks were laid within the available space without acquiring additional lands and encroachments along the track were also not removed,” said V Subramaniam, Project Director of Traffic and Transportation Forum in Chennai.

The Beach-Tambaram suburban section was inaugurated on April 2, 1931 during British era and thrown open to public transportation on May 31 the same year. An electric train with wooden coaches was operated then. Later, during the same year freight transportation from Harbour to Tambaram also commenced.

In the late 1980s, Beach-Tambaram suburban trains became the lifeline for public transportation in Chennai city. The metre gauge lines were converted into broad gauge lines in three different stages.  To cater to additional passengers, in November 2008 Southern Railway augmented trains with three EMU coaches and converted all rakes into 12 cars between Beach and Chengalpattu. However, Railways was unable to meet passenger demand in the section.

“During peak hours, trains carry 300 per cent more passengers than their actual carrying capacity, while during non-peak hours, occupancy comes down to 30 per cent.  Trains from Chengalpattu to Beach, reach Tambaram with 150 per cent of passengers. So eight peak-hour services operated during metre gauge era between Chennai Beach - Pallavaram should be resumed,” Subramanian said.
He said the third and fourth tracks should be developed in Chengalpattu-Tambaram section at the earliest to meet the passengers demand.

Among suburban stations,  Nungambakkam, Chromepet, Guindy and St Thomas Mount are categorised as high loading points during peak hours in Chennai suburban section, while Mambalam station receives a moderate crowd as it only gets a floating population.

Except Nungambakkam, other suburban stations did not have wider staircases and foot overbridges.
Besides, eight electric poles between Pazhavanthangal - St Thomas Mount and Chetpet - Nungambakkam are close to the tracks, putting the passengers to risk.

S C Chezhiyan, a retired official from construction wing of Southern Railway, said track changeover for Chennai Beach - St Thomas Mount peak-hour services was poorly planned. “Suburban transportation would have improved far better had Chennai Beach - Velachery MRTS been merged with St Thomas Mount station. We also had a plan to short terminate Express and EMU trains at St Thomas Mount and convert it into a major station. The entire suburban stations had to be studied for realignment,” he added.
While the Railways continues to wash its hands off on the deaths due to footboard travel, unions questioned the management for not taking measures to prevent footboard travel during office hours.

“Though a section of passengers travel on footboard on their own, not everyone. While the railway safety norm permits 15 car EMUs in Mumbai suburban, what prevents railways from introducing it in Chennai,” asked R Elangovan, vice president of DREU, who is also a retired railway employee.
He said that Mumbai suburban services have eight lanes in a few sections, including two dedicated lines for fast locals.

When contacted, Southern Railway officials said plans to upgrade the southern suburban network was already prepared during the master plan.  “An estimation to build foot overbridges, widening of staircases and escalators had been approved for ` 30 crores. Due to lack of additional coaches, no additional EMU trains can be introduced. Tambaram - Chengalppatttu third line has been delayed due to land acquisition,” the official said.

Commissioner of Railway Safety should inquire whether the required standard operating procedures (SOP) were followed on July 24, when EMU train services in Chennai Beach-Tambaram section were delayed, said C Selvaraj, a retired assistant commissioner of RPF. On Tuesday, four rail passengers who travelled on footboard of an overcrowded EMU train died  after they crashed against the concrete fence at St Thomas Mount station. One more died later.

The Chennai Beach-Thirumalpur train was overcrowded as EMU services were delayed between Beach and Tambaram for over 30 minutes. Officials claimed that Railways could not take responsibility as the passengers concerned travelled on the footboard.

Speaking to Express, Selvaraj pointed out that Railways had defined the SOP when trains are cancelled or get delayed. “When train get  delayed for more than 30 minutes during peak hours,  platforms will get flooded with passengers. Before and after the arrival of next train RPF, GRP and the Station Master should issue warning through public announcement system,” he said

More from Tamil Nadu.
Now we are on Telegram too. Follow us for updates
TAGS
Electrical Multiple Unit Chennai Tambaram Egmore