Whoever is elected, he will have the responsibility of addressing these pressing issues and if past elections are any indication, DMK’s A Raja could have an edge.

COIMBATORE : Mention of the Nilgiris evokes thoughts of cool climate, wildlife and greenery. Reality, however, is one of environmental pollution, encroachments on wildlife reserves and a water crisis. This last is particularly shocking given the river Bhavani, which brings water to Coimbatore, Erode and Tirupur districts, originates in the Nilgiris along with the Kabini and Moyar. However, the rivers are drying up. Whoever is elected from the reserved Nilgiris Lok Sabha constituency will have the responsibility of addressing these pressing issues.

The main contenders are A Raja of the DMK, M Thiyagarajan of the AIADMK and M Ramasamy of the AMMK. Of the three, Raja is the best known. The former union minister was charged in the alleged 2G spectrum scam, imprisoned and finally acquitted. Raja, who has represented the Perambalur Lok Sabha constituency three times in the past, is contesting in his eighth parliamentary election and his third from the Nilgiris, which he represented in 2009. 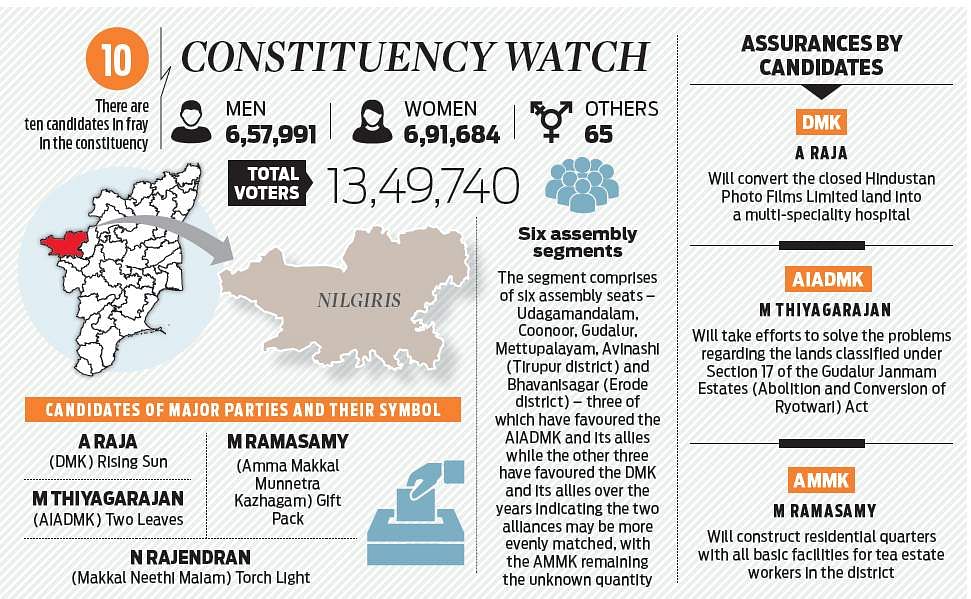 He has maintained strong ties with the constituency and party cadre here, attending family functions and other events, even though he lost to the AIADMK’s C Gopalakrishnan by over one lakh votes in 2014. Gopalakrishnan won with a vote share of 49.7 per cent with 38.4 per cent of polled votes being cast in Raja’s favour.

Interestingly, from at least 20 contenders vying for a ticket from the constituency, including Gopalakrishnan and former Coonoor municipality chairman Saravanakumar, the AIADMK chose to field former Pollachi MP Thiyagarajan, who is based in Avinashi, Tirupur. This despite concerns of local party workers who fear that Thiyagarajan is not as well-known in these parts. This may not be too much of a worry for Ramasamy, who is a retired IAS officer, as he worked as a Revenue Divisional Officer in the Nilgiris district before he cleared the UPSC exams and is said to be familiar with the local issues.

If past parliamentary elections are any indication, Raja could have an edge over the other contenders as the DMK’s ally, the Congress, has won here eight times since 1957. The DMK, AIADMK and BJP have won twice each while the Tamil Maanila Congress and Swatantara Party have won once each. On the other hand, the constituency comprises of six Assembly constituencies – Udagamandalam, Coonoor, Gudalur, Mettupalayam, Avinashi (Tirupur) and Bhavanisagar (Erode) – three of which have favoured the AIADMK and its allies while the other three have favoured the DMK and its allies over the years indicating the two alliances may be more evenly matched, with the AMMK remaining an unknown entity.

About a quarter of the electorate belongs to Schedule Caste communities while about 3% are Scheduled Tribes. In this context, the long-pending demand has been for a multi-speciality hospital to treat emergency cases as currently, the public has to travel over 80 km to receive treatment in Coimbatore. Similarly, while the region is known for tourism, employment opportunities are still limited, forcing youngsters to migrate to Coimbatore and Tirupur. Meanwhile, a real estate boom has led to encroachments into agricultural and forest lands that have adversely impacted the environment.

People from all over India are buying or building vacation houses here, V Sivadass of Nilgiris Environment and Cultural Service Trust said, explaining that the spike in such construction work was causing landslides. Similarly, with the demand for drinking water rising, residents of Coonoor and Ooty have been forced to buy water from private companies, he said.

“Unplanned tourism is ruining the beauty of the Nilgiris. The Hindustan Photo Films Manufacturing Company Limited (HPF) which was providing employment opportunities to thousands of local people was closed. Whoever is elected from here will have to work to create more employment opportunities by taking steps to set up environment-friendly industries,” he said.

“A separate development plan should be created for the Nilgiris, under which steps should be taken to prevent mushrooming constructions in the name of tourism,” said K Kalidass of environmental organisation Osai, adding that as per norms, 66% of Nilgiris should be forest land. “A sustainable plan for water management for Nilgiris should be developed. Human-wild animal conflict has also increased.  Aside from wild elephants, movement of Gaurs into human habitations has increased due to mushrooming of buildings in tea estates,” he said.