A whopping 365 hospitals, including 51 government Health Care Facilities in the State are operating illegally without valid consent from the Tamil Nadu Pollution Control Board.

CHENNAI: A whopping 365 hospitals, including 51 government Health Care Facilities in the State are operating illegally without valid consent from the Tamil Nadu Pollution Control Board.
This startling revelation was made by the Board in the status report submitted to National Green Tribunal. TNPCB’s report also reveals that 715 hospitals — 95 government and 620 private — do not have authorisation to dispose biomedical waste. This means, the board has no idea where and how these erring hospitals are dumping their hazardous medical waste.

Earlier, an investigation was conducted by the CB-CID and one of the major hospitals in Chennai was found to be selling its biomedical waste to an unauthorised third party.
As per statutory norms, every hospital (small or big) should mandatorily obtain Consent to Establish (CTE) and Consent to Operate (CTO) under Air Act and Water Act, besides authorisation under Biomedical Waste Management (BMW) Rules, 2016. 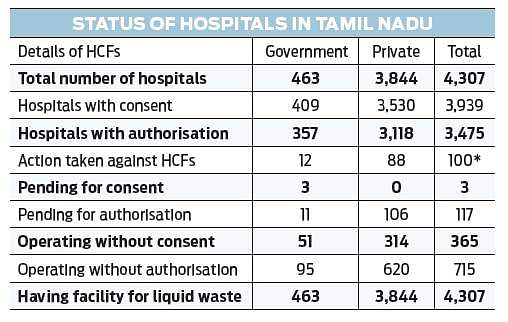 The Green tribunal, in response, has come down heavily on the Board for failing to take action.
“They (government and TNPCB) are very least concerned about the health hazards that have been caused on account of failure of the hospital to implement the rules. The Government and TNPCB are directed to file a detailed report within one month,” the court said.

The pollution control board made the submission to NGT in a case filed by activist Jawaharlal Shanmugam. Shanmugam is a member of an expert committee constituted to address patients’ safety in hospitals and is seeking to regulate the waste disposal by hospitals.

The Green tribunal, in its response, has come down heavily on the pollution board for failing to take action against the erring hospitals. “They (State government and TNPCB) are very least concerned about the health hazards that have been caused on account of failure of the hospital to implement the rules. So the State Government, as well as the Pollution Control Board, are directed to file a detailed report within one month. Failure of this will result in the tribunal taking serious action against the officers of the Pollution Control Board by imposing penalty on them,” the bench, comprising Justice K Ramakrishnan and expert member Nagin Nanda, warned.

The report should have the number of hospital/health care centres in the State, how many of them are complying with the rules and if they are complying, what is the manner in which it is being complied, is there any mechanism provided for supervising the same and against the non-complying unit, what is the action taken by the authorities, the NGT said.

Meanwhile, in another meeting, Indian Medical Association was also told to communicate to the remaining registered Private HCFs, to apply online and obtain consents.

Now we are on Telegram too. Follow us for updates
TAGS
TNPCB Tamil Nadu Pollution Control Board Health Care Facilities National Green Tribunal