The information was sought by SASY for the time period between 2014 to 2018. No legal action has been taken in any of the villages, according to the several RTIs.

NEW DELHI: Over 640 villages across 20 districts in Tamil Nadu still practise untouchability, according to information received by a Dalit advocacy group Social Awareness Society for Youths (SASY) in RTI queries.

The information was sought by SASY for the time period between 2014 to 2018. No legal action has been taken in any of the villages, according to the several RTIs.

Of the information sought from 32 districts in the state, 20 districts have responded so far. This year, Tamil Nadu had announced the creation of its 33rd district Kallakurichi.

“We filed a series of RTIs with district administration, police in order to monitor the implementation of the provisions of the SC/ ST prevention of Atrocities Act. Based on the evidence, we plan to bring out a fact sheet of the ground situation. The data shows the atrocities that Dalits continue to face even today,” said Pandiyan, executive director, SASY.

It shows the impunity that the dominant caste enjoy and the lackadaisical approach of the enforcement agencies to implement the law, he added. 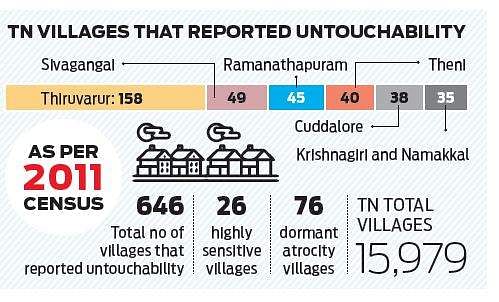 Now we are on Telegram too. Follow us for updates
TAGS
Untouchability Tamil Nadu villages