In what can be conceived as a move to push passengers to opt for AC classes, the Southern Railway has removed two second-class seater coaches from Kovai and Brindavan Expresses.

“Now passengers, who could not find seats in second-class seater coaches, will be left with no option but to choose chair car in Kovai Express or Chennai-Coimbatore Shatabdi Express. The minimum fare in Shatabdi starts at `950 (including `200 for catering charges),” said S Karthick, a regular commuter.
This is not the first such attempt. Ever since the launch of Coimbatore-Chennai Duronto Express in 2013 which was later converted into Shatabdi Express, the Railways has been accused of increasing travel time of Kovai Express so as to increase the patronage for Shatabdi. “Until 2013, the train reached Central at 9.20 pm during its return journey from Coimbatore. Then, the arrival time was fixed at 9.45 pm and now it is 11 pm,” said train enthusiast R Madhan.

When contacted, officials denied the charges and attributed the decision to higher demand of unreserved passengers in the Chennai-Jolarpettai section. “No additional general coaches can be added without removing existing coaches as they already had 24 coaches. Based on the sale of unreserved tickets at enroute stations, general coaches are being added,” said the officials. 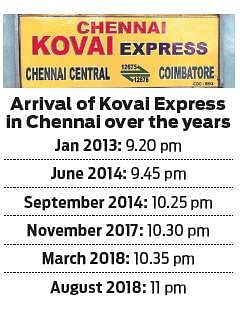