CM announces Tamil Nadu Water Resources Conservation and Augmentation Mission; to transform this as a people’s movement, a special intensive campaign will be undertaken

CHENNAI: To tackle the severe water scarcity in the State now and to ensure such a situation does not arise in future, Chief Minister Edappadi K Palaniswami on Saturday announced a Tamil Nadu Water Resources Conservation and Augmentation Mission (TNWRCAM).

To transform this as a people’s movement, a special intensive campaign will be undertaken in  August wherein ministers and other elected representatives and NGOs will take part. The Chief Minister appealed to the public to engage themselves in this mission.

“Rainwater harvesting, protecting water resources and increasing its storage capacity, sustaining drinking water supply by fortifying groundwater table, increasing efficient use of water in agriculture and its allied sectors besides implementing rainwater harvesting for rain-fed cultivation, reducing the requirement of freshwater by using recycled water, redeeming the ecosystem of rivers, important coastal areas, water bodies in estuaries, marshlands etc., will be the key aspects of this people’s movement ,” he said making a suo motu statement in the  Assembly.

He said the committee headed by him and consisting of retired engineers and experts and the Tamil Nadu Water Resources Conservation and Rivers Restoration Corporation will evolve a plan for execution to take TNWRCAM further. At the district level, collectors will head this movement and it would be executed with the help of many departments. Water Conservation Boards will be created at ward level in urban areas and at village and panchayat union level in rural areas. The government will also ensure massive participation of women in this movement. 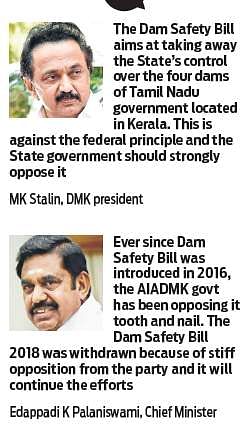 The long-term measures of this mission will include implementation of harvesting surplus water and floodwater during rainy season, continuing the efforts to link Godavari and Cauvery rivers and executing new schemes for fortifying groundwater table in firkas identified as ‘overexploited’ and ‘critical’.

He said the State government will soon release its policy on the use of recycled water. “At present, 525 MLD of water is being recycled in Chennai. Of this, 34 MLD is being used by factories and other uses.   The works on recycling 360 MLD of water using modern techniques at a cost of Rs 1,700 crore will also commence soon.

“The feasibility report for implementing ‘Nadanthaai Vaazhi Cauvery’ scheme, aimed at cleaning up the Cauvery river completely is being prepared. Similarly, steps will be taken to clean Bhavani, Vaigai, Amaravathi and Thamirabarani rivers,” the CM added.

500 houses to come up for EWS repatriates
Chennai: Deputy Chief Minister O Panneerselvam on Saturday made several announcements in the Assembly relating to housing, transport and security. The State government will set up ‘Tamil Nadu homes’ and ‘Tamil Nadu Cultural Centre’ in Mumbai to make travel easier for people from the State and enhance tourism as well.

Other announcements include 500 houses to be built for repatriates who belong to the economically weaker sections under the ‘Housing for all’ scheme’, 1000 houses, each of 650 sq.ft for EWS built on excess land belonging to slum clearance board.  To make Tamil Nadu slum-free by 2023, Rs 4,860 cr has been allocated to build 1.06 lakh houses, which include 82,000 individual houses. At Perumbakkam, with the help of multinational companies, 1,152 houses are to be built at a cost of Rs 121 crore. Details about housing units and flats will be updated on website of Urban Development Department.

Chennai: Chief Minister Edappadi K Palaniswami informed the assembly on Saturday that MLAs’ local area development fund will be increased to Rs 3 crore from Rs 2.5 crore. Speaking on the demands for grants for Public department, State legislature, finance department and others, he said,

“The demand for increasing the MLAs Local Area Development Fund (LADF) was raised by both ruling and opposition party members. The current MLAs LADF will be increased to Rs 3 crore from the present Rs 2.5 crore”.

S Vijayadharani of Congress said the State government should offer the MLAs LADF under the untied fund. This is because legislators are finding it difficult to spend the sum under the specific title as prescribed.

Stay up to date on all the latest Tamil Nadu news with The New Indian Express App. Download now
(Get the news that matters from New Indian Express on WhatsApp. Click this link and hit 'Click to Subscribe'. Follow the instructions after that.)
TAGS
water crisis Edappadi K Palaniswami Tamil Nadu