1967: Rise of Dravidian movement and the dramatic fall of Congress

After the loss, Congress thought that it had faced a temporary setback and that it would recover. But the last five decades of Tamil Nadu’s political history have proven otherwise

CHENNAI: No one except the Congress was surprised when the 1967 general elections swept the DMK to power. Not only the Congress but also its leader K Kamaraj, called the King Maker for he was instrumental in installing two Prime Ministers at the helm in the country, was defeated in the elections. That the invincible Congress leader was made to bite the dust by a young DMK candidate sent shock waves across the nation. Kamaraj stepped down as Chief Minister of the State on October 2, 1963 as part of his ‘K-plan’ to work hard to protect the party base. 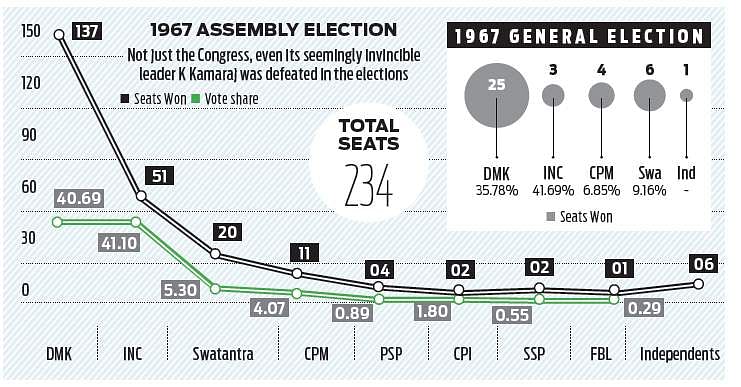 M Bhaktavatsalam took over from him as Chief Minister on October 3, 1963. During Bhaktavatsalam’s tenure, two significant issues — Hindi imposition and famine — dominated the State. The State witnessed massive protests against the imposition of Hindi against which at least 15 people committed suicide and the police fired at the agitators. And then, there was a severe famine in the State, which left scores struggling for food. The inability of the Baktavatsalam government to tackle both issues sparked anger not only among the electorate but also among a section of Congress workers.

The DMK contested from 25 LS and 173 Assembly constituencies. The party allotted the remaining seats to its allies. The Congress contested 31 LS seats and 234 Assembly seats. The CPI contested seven Lok Sabha seats and the CPM five.

The DMK also cleverly capitalised on the mass support for MGR. It won 137 seats in the Assembly, well over the magic number of 118. Its alliance partners had won 38. However, the Congress’ tally slid from 139 seats to a mere 51. In the LS elections,  the DMK won all 25 seats it had contested.

After the loss, Congress thought that it had faced a temporary setback and that it would recover. But the last five decades of Tamil Nadu’s political history have proven otherwise

Now we are on Telegram too. Follow us for updates
TAGS
Congress 1967 general elections DMK Dravidian movement K Kamaraj